In a botched assassination attempt that earned her the infamous, yet slightly inaccurate, title of “Princess Killer,” potioner master Kyra is on the run… from, well, pretty much everyone. Trained in the art of potions, poisons and specifically, poisoned weapon mastery, her only goal is to find the now-hidden princess (who also happens to be her former bestie. Yeah. Awkward.) and finish what she started. Unfortunately, it’s been three months since the incident, and Kyra’s running out of resources and clues, causing her to seek out… alternate, more magical, methods of tracking her quarry.

Reading the blurb, I knew I had to get my hands on this book. A girl who tries to kill her best friend, fails, and is now more determined than ever to find this former friend and kill her? Is Kyra really a villain? How did Kyra come to this point? Why would Kyra turn on a friend? Armed with a… pig? And a love interest named… Fred? I just had to find out what was going on with all of this, and as I suspected I would, I found Poison to be adorably charming.

Kyra. Unknown villain status to be determined, Kyra is an extremely strong, independent, and driven character. At just sixteen, she is one of the most accomplished potioners in the kingdom, part of the Master Trio, her skills much in demand. Unfortunately, trying to kill a princess is pretty much guaranteed to send anyone’s reputation and livelihood into a tailspin, and three months into her search for the princess finds her dispirited, lonely, cautious and distrustful. However, her stubbornness and conviction refuse let her give up and give in. I did find her to be a tad prickly, plainspoken, easily annoyed, and a bit short-tempered. While some of these traits are certainly amplified by her current situation, it’s also just who she is and I found that I liked her because of these qualities. Instead of being off-putting they made her more real.

Rosie. ADORABLE. I want a pet pig. And that’s all I have to say about that.

Fred. Incredibly friendly and instantly likable,  Fred is one of those people with the knack of putting others at ease. He’s calm, easygoing, not easily ruffled, dependable, capable, humorous… and boy, can he cook! Or… so we’re told. Fred’s sense of humor is this surprising mixture of innocence and wickedness, and made for some really fun banter between he and Kyra. In short, he is one of the most fun love interests I’ve come across in awhile; a refreshing change from the internally tormented male leads that so often populate YA.

Romance. The romance in this book definitely falls into the “cute” category. And while I loved seeing Kyra and Fred interact, I wish the development of their relationship had been a little more gradual. Nevertheless, it was as I said, “cute,” and while the romance is definitely a piece of the story, it doesn’t overshadow the larger plot.

Story. I was expecting Poison to be a lot darker than it turned out to be. Instead, while it had it serious moments and obvious conflict, it is lighter and more fun than I was expecting. I suppose I should have expected a lighter tone from the start given the fact that the heroine has a magical pet pig, and it quickly became clear that Poison was going to have a more fairytale-esque quality than epic fantasy… which turned out to be just the right fit for this story. As far as writing goes, Poison fell a little more on the middle grade/younger teen side of the scale. While I prefer a little more gravity and weight in my reads, I still very much enjoyed this one, and I always like discovering books that I’ll be able to share with my daughter in the near future.

Poison also has some great plot twist moments and it’s pretty fast paced – dumping the reader into the next part of the adventure with barely a chance to breathe – though at times some elements did feel a little forced or contrived. However, it was such great fun, that it didn’t bother me overly much.

Overall. In the mood for a fun, rollicking, whimsical fairytale-esque adventure with a pinch of romance? Then Bridget Zinn’s Poison is for you. 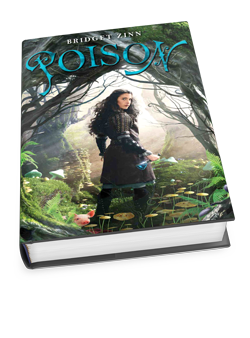