Cinder returns in the second thrilling installment of the New York Times-bestselling Lunar Chronicles. She’s trying to break out of prison—even though if she succeeds, she’ll be the Commonwealth’s most wanted fugitive.

Halfway around the world, Scarlet Benoit’s grandmother is missing. It turns out there are many things Scarlet doesn’t know about her grandmother and the grave danger she has lived in her whole life. When Scarlet encounters Wolf, a street fighter who may have information as to her grandmother’s whereabouts, she has no choice but to trust him, though he clearly has a few dark secrets of his own.

As Scarlet and Wolf work to unravel one mystery, they find another when they cross paths with Cinder. Together, they must stay one step ahead of the vicious Lunar Queen who will do anything to make Prince Kai her husband, her king, her prisoner.

Well, apparently Marissa Meyer did. There’s just something about her particular brand of digitized, mechanized, bio-engineered, space-faring fairytale that’s absolutely enthralling. Her heroines are strong, intelligent, scrappy, and resourceful individuals who are forced to fight for their happily-ever-afters. There are princes and “princes,” but their appearances in the story doesn’t magically solve the heroines’ struggles. Rather they tend to compound problems, and sometimes, they are the problem. Meyer’s antagonist, a combination of wicked witch and malevolent queen, is so deliciously evil and truly scary, backing our heroines into seemingly inescapable corners. And there’s just something so very clever in the way that all of Meyer’s heroines share the same ultimate nemesis… because she’s just that evil. The world is fascinating, familiar, yet undeniably different; with enough touches of the recognizable, but with twists and details, large and small, that remind the reader that this is different than the world we’re used to. And Meyer conveys these characters, backdrops, and situations through her beautifully evocative style that inspires a range of emotions from loss and despair, to anger and helplessness, to oh-so-warm and fuzzy, to “oh, it’s so totally on now, bad dudes!”

When a story has the ability to enchant so completely and when it is able to elicit such strong reactions, well ladies and gentlemen, that’s when you know you’ve found a good book.

When we saw Cinder last, she was the most recent resident of New Beijing Prison, waiting to be handed over to the Lunar queen, Levana. However, thanks to several parting gifts from a questionably motivated compatriot, Cinder has been given the means to escape. And escape she does with the help of her ridiculously vain, and opportunistic fellow inmate, Capt. Carswell Thorne… who just so happens to be in possession of his very own spaceship.  Sort of. With all of heaven and all of earth searching for her, Cinder must decide what to do with the knowledge she’s been given, her new-found abilities, the expectations inherent in her heritage, and decide just whom she can trust.

But this is not just Cinder’s story anymore, but also Scarlet’s. A farm girl from the south of France, Scarlet Benoit is desperate and angry after the Toulouse police department’s investigation has gone cold in the search to find her missing grandmother. The case is officially closed citing a voluntary disappearance. Convinced that her beloved grandmother has been kidnapped, a chance encounter with a mysterious street-fighter named Wolf makes her think that he may have a lead to follow. Unsure if she can trust him, but out of options, Scarlet leaves home behind to embark on a dangerous journey to rescue her grandma.

As with Cinder, Scarlet is also a story told via several narrators – the primary perspectives being Cinder, Scarlet & Kai’s – and once again Meyer uses this multi-POV very effectively, particularly in regards to pacing. Switching narrators from chapter to chapter, she typically ends each character’s segment with a hook or a mini-cliffhanger as she draws Cinder and Scarlet’s stories ever closer together, which left me in a constant state of “I must know what happens next!” and made the book a hard one to put down. “Just one more chapter, and then I’ll stop?” Seriously, don’t make promises you can’t keep. Meyer throws out her tantalizing plot lines, and I was a goner; reeled me right in. Hook, line and sinker.

And Meyer has upped the ante in this book. The uneasy truce between the Lunars and Earth is quickly crumbling, made even more tenuous by Cinder’s escape from prison. Levana is not to be denied anything, her motives becoming more transparent as her stranglehold on Earth grows ever tighter.

It’s beautifully written and the plot twists and creative nods to the Cinderella story and now Red Riding Hood’s tale are so artfully and smartly incorporated.

Cinder. Cinder is fending off attacks from without and within in Scarlet. Not only is every law enforcement agency on earth looking for her, her face plastered on every news broadcast, but she’s also dealing with recent discoveries about herself — her heritage, family, abilities, what her obligations are, and what her next step should be. Though Cinder is one tough cookie, her gut reaction tends toward “flight” rather than “fight,” and she goes through some rather intense moments of self-discovery in Scarlet as she works through the realities of her life as it stands now.

Kai. Stuck between a rock and a hard place, newly crowned Emperor Kai is learning firsthand just what it means to rule. The situation of the Eastern Commonwealth is growing desperate as the Lunar threat becomes more real with each passing day, and he must weigh the good of the many against the good of the few.

Scarlet. Scarlet is a red-haired spitfire who wears her heart on her sleeve. Driven, passionate, more aggressive than Cinder, she tends to rush headlong into situations without considering all the consequences. She’s got a temper to match her hair color, but she’s also kind and compassionate. Not a halfway kind of girl, she feels very deeply; so whatever she’s feeling, it shows. Being thrown into the circumstances she’s thrown into, Scarlet’s stretched thin emotionally, and her responses to situations are very understandable, identifiable and make her a likable, empathetic character.

Wolf. With traits that lean uncomfortably close to the predator he’s named for, Wolf is somewhat of a compelling (and handsome) enigma to Scarlet. He’s incredibly secretive, but hesitantly willing to help, and he’s Scarlet’s only lead in locating her grandmother. But is he trustworthy?

Captain Carswell Thorne. Scarlet runs across Thorne when she miscalculates the route for her escape, and strikes up an uneasy agreement with her fellow inmate – she’ll help him escape the prison, and he’ll get her out of New Beijing. Carswell is vain, arrogant, a bit of a womanizer, a criminal and an opportunist; though he appears to be an “ok” guy, all things considered. In a book that’s a bit weighty emotionally, Thorne provides moments of much-needed levity. Although, I hope in the next book he’ll be a bit less comic relief and that Meyer will develop him more fully.

Iko. She’s back! I won’t say in what capacity, but it’s absolutely perfect.

Overall. An outstanding, captivating second act of The Lunar Chronicles , Scarlet is brilliant, sexy, romantic, action-packed, thrilling, and everything I could’ve hoped for in this sequel. 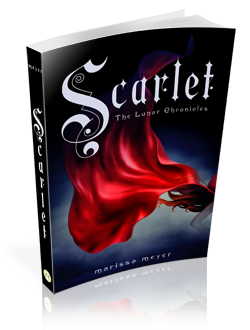 Source: ARC via Around the World Tours