Juliette has escaped to Omega Point. It is a place for people like her—people with gifts—and it is also the headquarters of the rebel resistance.

She’s finally free from The Reestablishment, free from their plan to use her as a weapon, and free to love Adam. But Juliette will never be free from her lethal touch.

Or from Warner, who wants Juliette more than she ever thought possible.

In this exhilarating sequel to Shatter Me, Juliette has to make life-changing decisions between what she wants and what she thinks is right. Decisions that might involve choosing between her heart—and Adam’s life.

Disclaimer:  As a review of the second book in the Shatter Me trilogy, there is the potential for spoilers.  Proceed at your own risk.   For my review of Shatter Me click on the title.

Tahereh Mafi has done it again.  She’s completely captivated, entranced, and frustrated me with her gorgeous prose and delightfully complicated characters.  I’ll be honest, part of me hated where she took the story and what certain characters went through.  I was more conflicted about how to rate this book than I have been about any other book I’ve ever read because I wanted to scream and rage over certain aspects.  I equally wanted to hug the book and sing it’s praises but at the same time throw it up against a wall.   Yet the more I thought about it and the absolutely perfect delivery of her complex narrative, the more I realized she is a genius.  She made me feel exactly what she wanted me to feel about this installment of her work.  I was supposed to feel conflicted.  I was supposed to rage and cry and cheer.  I was supposed to want to shake Juliette and at the same time want to hug her…despite the fact that hugging her could kill me.  ;o)

The world:  I really love the world Tahereh’s built in this series.  It’s so complicated and yet familiar.  We get to learn more about the infrastructure and corruption of the government as well as the innerworkings of the society Castle has developed.  We learn more about the characters and their abilities as well as the back stories of several key players.  It’s really rather intricate and very well done.

The plot:  This series is definitely character driven which typically I like.  I was a bit annoyed at times in this book though.  It felt like it fizzled out several times before picking back up again and therefore it lost a little momentum which had to keep getting rebuilt throughout.   But in the end, the story moved forward.

Juliette:  She frustrated me to no end in this book.  I wanted to hug her and strangle her at the same time.  Her self-destructive, self-loathing personality really made me annoyed at times.  Her secrets and flat-out lies or half-truths irritated.  She’s broken and needs to put herself back together and I felt like she resisted every effort to do so.  The character I loved so much in Shatter Me was still there underneath it all and she does move forward in some ways but she’s conflicted and the genius part of it is that I was made to feel everything she felt in such a dramatic way that I couldn’t stop thinking about it long after I finished the book.

Warner:  If you’ve read Destroy Me  you know what a complicated character Warner is.  Let’s just say he gets more complicated, if that’s possible, in Unravel Me.   I really don’t want to like him, no love him, as much as I do.  I enjoy reading about him and I feel a lot of compassion for him but that doesn’t mean I want him and Juliette to be together.  Just because I feel empathy for his daddy issues doesn’t mean I want to switch teams.  Besides, I have a theory about his interactions with Juliette and I am so not cool with it.  I’d be happy to discuss my theory with anyone who’s read it but I’m not going to bring it up here because I don’t want to spoil things.

Adam:  I felt like Adam was reduced to a backdrop for the Juliette/Warner drama and I hated it.  In Shatter Me, I was absolutely captivated by his character’s development, so I really missed him in this book.  I get why he had to be moved to the background.  I know Juliette needs to learn to stand on her own.  However, he was severely missed, by me at least.  =)

Kenji:  That guy.  I love him.  He has some serious snark.  He voiced everything I wanted to say.  When I was annoyed with Juliette or Warner or whoever, he would come along and say what I was thinking.  Yay Kenji!

Castle:  I want to hug that man.  The pressure, the compassion, the responsibility he has.  Too much for any one person to endure.

James:  Oh dear, how I love that little boy!  Adam’s little brother had me won over completely in Shatter Me and only added to my love for him in this book.   He’s a complicated mix of innocence and intuition, childishness and maturity.  I totally adored him.  =)

Overall:  Unravel Me was beautifully delivered and made me absolutely crave the next book.  Still, Team Adam.  ;o) 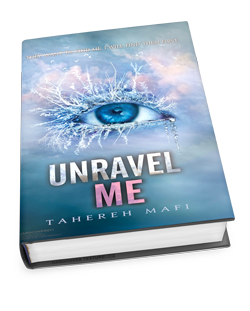