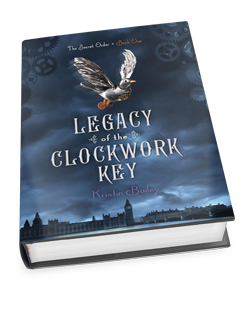 Legacy of the Clockwork Key

A teen girl unravels the mysteries of a secret society and their most dangerous invention in this adventure-swept romance set in Victorian London.When a fire consumes Meg’s home, killing her parents and destroying both her fortune and her future, all she has left is the tarnished pocket watch she rescued from the ashes. But this is no ordinary timepiece. The clock turns out to be a mechanical key—a key that only Meg can use—that unlocks a series of deadly secrets and intricate clues that Meg is compelled to follow.

Meg has uncovered evidence of an elite secret society and a dangerous invention that some will stop at nothing to protect—and that Meg alone can destroy. Together with the handsome stable hand she barely knows but hopes she can trust, Meg is swept into a hidden world of deception, betrayal, and revenge. The clockwork key has unlocked her destiny in this captivating start to a trilogy.

I am always on the hunt for the next good YA steampunk book, and though vague this one looks like it has potential.  Throw in a handsome stable hand and I totally must have it. 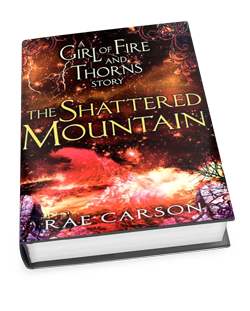 On the outskirts of Joya d’Arena, small villages fight for survival against the onslaught of sorcerers and raiders. Mara’s village has been safe–so far–but Mara decides to escape anyway. Escape from her harsh, abusive father. Escape with her first love. But when their plans fall on the same day that the animagi burn the village to the ground, Mara faces losses that could destroy her. She’s a survivor, though. She is going to make it through the mountains, and she is going to protect the refugees following her. Because there’s a rumored safe haven . . . and some say they have found the Chosen One. Told from Mara’s point-of-view, The Shattered Mountain is an alternate perspective of the beginning of the acclaimed The Girl of Fire and Thorns.

I am so excited to get to know Mara better. I LOVE this series so much so another look into one of Rae’s characters. Just too much fun! =) Really looking forward to it! 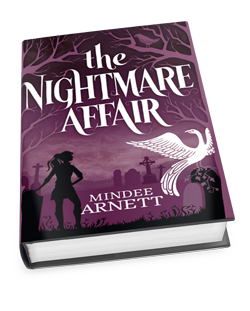 Sixteen-year-old Dusty Everhart breaks into houses late at night, but not because she’s a criminal. No, she’s a Nightmare.

Being the only Nightmare at Arkwell Academy, a boarding school for magickind, and living in the shadow of her mother’s infamy, is hard enough. But when Dusty sneaks into Eli Booker’s house, things get a whole lot more complicated. He’s hot, which means sitting on his chest and invading his dreams couldn’t get much more embarrassing. But it does. Eli is dreaming of a murder.

Now Dusty has to follow the clues—both within Eli’s dreams and out of them—to stop the killer before more people turn up dead. And before the killer learns what she’s up to and marks her as the next target.

The blurb for this one sounds hilarious. Sitting on a hot guy’s chest in the middle of the night? LOL! I imagine this will be a fairly serious story with some great comic relief. Count me in!