City of a Thousand Dolls

Nisha was abandoned at the gates of the City of a Thousand Dolls when she was just a child. Now sixteen, she lives on the grounds of the isolated estate, where orphan girls apprentice as musicians, healers, courtesans, and, if the rumors are true, assassins. Nisha makes her way as Matron’s assistant, her closest companions the mysterious cats that trail her shadow. Only when she begins a forbidden flirtation with the city’s handsome young courier does she let herself imagine a life outside the walls. Until one by one, girls around her start to die.

Before she becomes the next victim, Nisha decides to uncover the secrets that surround the girls’ deaths. But by getting involved, Nisha jeopardizes not only her own future in the City of a Thousand Dolls—but her own life. 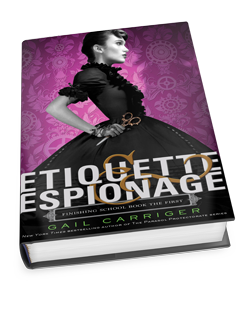 Fourteen-year-old Sophronia is the bane of her mother’s existence. Sophronia is more interested in dismantling clocks and climbing trees than proper etiquette at tea–and god forbid anyone see her atrocious curtsy. Mrs. Temminnick is desperate for her daughter to become a proper lady. She enrolls Sophronia in Mademoiselle Geraldine’s Finishing Academy for Young Ladies of Quality.

But little do Sophronia or her mother know that this is a school where ingenious young girls learn to finish, all right–but it’s a different kind of finishing. Mademoiselle Geraldine’s certainly trains young ladies in the finer arts of dance, dress, and etiquette, but also in the other kinds of finishing: the fine arts of death, diversion, deceit, espionage, and the modern weaponries. Sophronia and her friends are going to have a rousing first year at school.

First in a four book YA series set 25 years before the Parasol Protectorate but in the same universe.

Finishing school…spies…and manners, oh my. Oh, yes, I am looking forward to this one!

An invisible girl is a priceless weapon. Fiona’s own father has been forcing her to do his dirty work for years—everything from spying on people to stealing cars to breaking into bank vaults.

After sixteen years, Fiona’s had enough. She and her mother flee to a small town, and for the first time in her life, Fiona feels like a normal life is within reach. But Fiona’s father isn’t giving up that easily.

Of course, he should know better than anyone: never underestimate an invisible girl.

There aren’t a whole lot of YA books where both parents are present. Granted… this doesn’t sound like she has a good relationship with her father, but the premise sounds quite interesting. Working against your parents isn’t a common theme.