Double, double, toil and trouble. Sometimes, the quest for high school royalty can be deadly! In this emotionally-charged twist on Shakespeare’s Macbeth, a self-conscious shutterbug named Skye Kingston navigates a treacherous school year in Alaska fraught with unspoken secrets and tragic twists of fate. Along the way she encounters three strangely prophetic BFFs; one social-climbing, sociopathic cheerleader; and a heart-stopping hottie named Craig McKenzie: the man who would be Prom King. Can Skye save the boy she loves — and herself — before they get caught in the crosshairs?

Exposure is the second book in the Twisted Lit Series (see my review of Tempestuous, the first book in the series, here).  It’s a retelling of sorts of Shakespeare’s Macbeth which is truly the only one of Shakespeare’s tragedies I enjoyed, so I had high hopes for this novel.  While I did enjoy Exposure, I didn’t quite like it as much as Tempestuous.  Here’s why.

This is one of the rare times where I liked secondary characters better than main characters.  I really LOVED the interpretation of the three witches.  Tess, Cat, and Kaya are absolutely perfect.  Totally loved them.  Lenny was hilarious.  Jillian was a perfect newspaper editor.  Beth is a really great Lady Macbeth.  Duff was a great Macduff.  Duncan=perfect, er, Duncan.  You get my point.  Even the secondary characters who were added to simply add depth to the story were fun.

The setting.  Alaska was absolutely perfect as a substitute for the remoteness and ruggedness present in Macbeth, and what better setting than high school for an aspiring king and queen?

The voice.  Helmes and Askew have mastered the way teenagers think and speak.  I really loved the way certain very teen issues were handled.  It made for a very believable tone to the book.

The Shout-Outs.  Each chapter title is a line from the original play so things like “Out damned spot” made an appearance without seeming out of place.  The  invading forest makes a fitting appearance.  Little things sprinkled throughout made this story a great tribute to a classic.

It really wasn’t a retelling of Macbeth.  The story on its own was enjoyable but though there were similarities to the classic play and some fun shout outs to the original, Macbeth is dark and twisted.  The descent to madness, the murders to cover up murders, the lies upon lies, the epic intrigues and final downfalls…Exposure holds little of this.  Perhaps it’s unfair to compare the two but since it is marketed as a retelling, I feel like comparison is unavoidable.  It felt like the whole time we were skating around the dark undertones of Macbeth.  We would almost get there and then the story would run away at the last second.  It sort of frustrated me because I really think the characters and story could have handled it.  It would have really added depth and given the characters a chance to shine.

Consequences.  I’m not going to spend a lot of time here because I don’t want to spoil things but I had serious issues here.  Some crazy shizzle goes down at the beginning of this book and honestly…I can’t go into it without spoiling the book.  So, I won’t.

I also felt Skye and Craig could have used more development.  I really didn’t feel connected to Skye.  I wanted to.  I tried to.  However, in the end, I just couldn’t muster a lot of empathy or understanding for her and the decisions she made.

Overall:  Though I do believe Tempestuous was better executed than Exposure, it was an enjoyable read and was an interesting, though divergent from the original, twist on Macbeth. 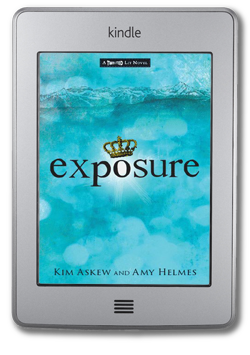