What if your life wasn’t your own?

Liv comes out of a coma with no memory of her past and two distinct, warring voices inside her head. Nothing, not even her reflection, seems familiar. As she stumbles through her junior year, the voices get louder, insisting she please the popular group while simultaneously despising them. But when Liv starts hanging around with Spencer, whose own mysterious past also has him on the fringe, life feels complete for the first time in, well, as long as she can remember.

Liv knows the details of the car accident that put her in the coma, but as the voices invade her dreams, and her dreams start feeling like memories, she and Spencer seek out answers. Yet the deeper they dig, the less things make sense. Can Liv rebuild the pieces of her broken past, when it means questioning not just who she is, but what she is?

All the Broken Pieces boasts such an intriguing premise, but one that’s not completely unique to recent YA fiction – a girl who wakes up after a severe trauma, feeling fundamentally different, remembering little to nothing about her past, yet who has a pervasive sense of… “wrongness.” Madsen’s blurb immediately brought to mind both Teri Terry’s Slated and The Adoration of Jenna Fox by Mary E. Pearson, both of which I really enjoyed and both of which are their own unique stories. Honestly, I wanted to see how Madsen would take this same general premise and create something different. And did she? Yes, I have to say, she did.

After wrapping her car around a tree, 16-year-old Olivia survives several life-saving surgeries and a coma and is on the road to recovery when her parents decide to up and move their family away from their home in Minnesota to a tiny town in Arizona. Determined to start afresh, Liv enrolls in high school and soon finds herself embroiled in standard high school drama – mean girls, new friends, a boy who she can’t stop thinking about. After all she’s been through, it would appear that life is finally once again approaching normal… but her parents’ unusual behavior every time she asks questions about her past, the dualing voices in her head she works to hide, the vivid dreams that evoke deep emotional responses causes Liv to become more and more determined to find out just what happened that fateful night and what she’s not being told.

Liv. She starts out, very understandably given her circumstances, as a pretty blank slate. She longs to know who she was and is, and to start living her life again. And so she begs her pro-homeschooling mom to enroll her in public high school. Liv wears the physical scars of her accident, she can’t remember any personal details, her mom is determined to keep her not-remembering a secret, she has two other distinctive voices piping in their opinions at the most inconvenient times, she’s socially awkward and slightly agoraphobic, and she lacks the requisite pop-culture knowledge required of a teenager in this day and age. But despite all that, Liv pushes through all her reservations and personal fears knowing that she needs normal, and normal means high school – living not hiding. And through the novel, Madsen does a pretty good job taking Liv from blank slate to fully realized individual.

Story. The underlying concept of this story is appealingly macabre, and slightly unsettling, which is appropriate given the story upon which this novel is loosely based. I’m going let you work that bit out on your own, otherwise going into All the Broken Pieces with that knowledge is, in my opinion, a bit spoilery. But though the concept is definitely interesting, I’m not sure it was as well-executed as it could have been. The evolution of the mystery lacked that necessary multi-layered subtlety that makes me fall in love with a good puzzle. And though the idea behind this story is, again, interesting, it ultimately required a little too much suspension of disbelief on my part. I will say though, I did really like the scenes featuring Liv’s dreams, I think those were some of Madsen’s strongest moments in the novel.

Romance. The romance was cute and satisfying and Spencer was a likable love interest. I loved his list – the simple milestones in childhood and life that Liv can’t remember experiencing – and his determination that she experience them. His tendency to run “hot ‘n cold” did get somewhat old after awhile, but overall he and Liv do have some great moments of banter, and they are pretty adorable together.

Tropishness. It was handled moderately well, and it’s not really all this story’s fault, but it’s just one more straw on the camel’s back, so to speak. I just find myself slightly disenchanted with the typical “petty, mean girls”, “the hot jock”, “the loner guy” falling for the “new girl,” (and vice versa), the inescapable and tricky dynamic of the lunchroom social hierarchy, the PMG-in-charge also wanting our heroine’s love interest… etc.

I’m just thankful there wasn’t a school-organized social activity that required a formal dress and heels written in as the catalyst for the plot’s climax. <thumbs up>

Parents. I do like how much Liv’s parents are involved, active participants in this story. Involved, concerned, caring parents who enforce rules and boundaries are a good thing, really. Yes, I’m aware I may have just earned some lame, old lady points for that.

Cover. I don’t often mention the covers in my reviews, but in this case the cover is pretty perfect in how it visually represents the story. So kudos to whomever came up with the cover idea.

Overall. While some of the execution might have fallen a little short, All the Broken Pieces is an entertaining read with an intriguing premise and a cute romance. 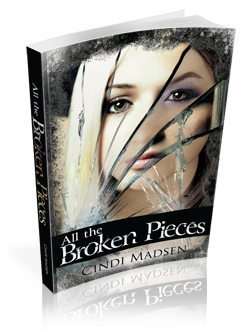 Title: All The Broken Pieces