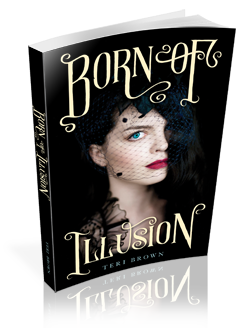 Anna Van Housen is thirteen the first time she breaks her mother out of jail. By sixteen she’s street smart and savvy, assisting her mother, the renowned medium Marguerite Van Housen, in her stage show and séances, and easily navigating the underground world of magicians, mediums and mentalists in 1920’s New York City. Handcuffs and sleight of hand illusions have never been much of a challenge for Anna. The real trick is keeping her true gifts secret from her opportunistic mother, who will stop at nothing to gain her ambition of becoming the most famous medium who ever lived. But when a strange, serious young man moves into the flat downstairs, introducing her to a secret society that studies people with gifts like hers, he threatens to reveal the secrets Anna has fought so hard to keep, forcing her to face the truth about her past. Could the stories her mother has told her really be true? Could she really be the illegitimate daughter of the greatest magician of all?

Born of Illusion is the first book in a new series. Each book in the series will introduce a new historical figure, whose legend is shrouded in magic, along with the young woman whose fate is irrevocably tied to his. The through line in each of the books will be The Ghost Club, the real life secret society that was founded in 1862 by the likes of Charles Dickens, Sir Conan Doyle, and W. B. Yeats to advance mankind’s knowledge of the paranormal. The first three books in the series will deal with Houdini, Aleister Crowley and Rasputin.

Ok.  What about this blurb doesn’t scream awesome?  Let me answer that for you.  Nothing.  Everything points to awesome.  Total awesome.

My Ex From Hell

Prior to the Halloween dance, Sophie figures her worst problems involve adolescent theatrics, bitchy yoga girls, and being on probation at her boarding school for mouthy behaviour. Then she meets bad boy Kai and gets the kiss that rocks her world.

This breath stealing lip lock reawakens Sophie’s true identity; Persephone, Goddess of Spring. She’s key to saving humanity in the war between the Underworld and Olympus, target numero uno of Hades and Zeus, and totally screwed.

My Ex From Hell is a romantic comedy/Greek mythology smackdown. Romeo and Juliet had it easy. 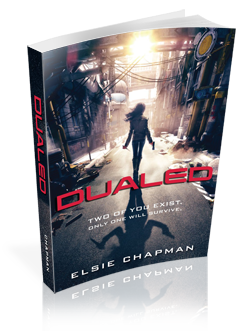 You or your Alt? Only one will survive.

The city of Kersh is a safe haven, but the price of safety is high. Everyone has a genetic Alternate—a twin raised by another family—and citizens must prove their worth by eliminating their Alts before their twentieth birthday. Survival means advanced schooling, a good job, marriage—life.

Fifteen-year-old West Grayer has trained as a fighter, preparing for the day when her assignment arrives and she will have one month to hunt down and kill her Alt. But then a tragic misstep shakes West’s confidence. Stricken with grief and guilt, she’s no longer certain that she’s the best version of herself, the version worthy of a future. If she is to have any chance of winning, she must stop running not only from her Alt, but also from love . . . though both have the power to destroy her.

Elsie Chapman’s suspenseful YA debut weaves unexpected romance into a novel full of fast-paced action and thought-provoking philosophy. When the story ends, discussions will begin about this future society where every adult is a murderer and every child knows there is another out there who just might be better.