The first time I noticed this novel, I passed it by.   I’d never read The Tempest so it didn’t really interest me much.  Plus, I’m not really a fan of reading Shakespeare’s plays.  I’m firm believer that his plays should be seen and not read…at least in their pure form.  Add to that, the dreadful Shakespeare professor I had in college and you have all the makings of a book being added to my “Not For Me” list.  BUT, I should learn to never say never.  When I saw this novel pop up on Goodreads over and over and then on NetGalley, I decided I just had to find out what all the hype was about.  So, after wikipedia-ing The Tempest to have a little background knowledge of the play, I read…and actually really liked it.  So…without further adieu about nothing…my review.

I think sometimes we overlook the “fun factor” of a book and this was a book that was just plain fun.  I sometimes get loaded down with a lot of heavy supernatural, live and death, romances and deep, intriguing dystopias and even heavy contemporaries so every once in a while I need something light and funny to lighten the mood.  Often I equate these light and fluffy reads with cotton candy, fun but not a lot there.  In this case, though, that couldn’t be further from the truth.

The characters were absolutely wonderful.  Miranda Prospero is the recently deposed Queen of the Populars at the local prep school.  She’s fallen from her throne and is forced to get a job in the mall food court.  Nope, I still don’t think you have the image…imagine the prom queen turning in her crown in exchange for a hat with a spinning hot dog on top…yep, now you’ve got Miranda.  Then add in Caleb.  The first time Miranda sees him, he’s wearing a cape…like a Hogwarts cape…no I’m serious.  Let’s just say, these two couldn’t be more different at first glance.   Then you have Ariel, Miranda’s quirky coworker/sidekick.  The girl is hopelessly awkward and yet…well, I’ll just let you read it.  Add in a whole batch of very fun secondary characters and you have all the makings of a great tale.

The story was delightfully crafted with that special Shakespearean humor and banter but modernized.  The basic plot is that the mall employees are snowed in for the night.  There’s a group of kids from Miranda’s prep school who’ve entrenched themselves on one end of the mall and the food court/other employees are on the other.  Meanwhile, someone is breaking into stores at the mall and people are going missing.  Add in Miranda and Caleb getting handcuffed together and voila!  You have a plot thicker than my old Shakespeare professor.

It’s cute and adorable and fast paced but yet, there’s that little something more which is what really made me like the story.  When Miranda and Caleb meet they both make assumptions about one another based on what they see or have heard about the other and it really takes a lot for them to get over it.  In the course of one evening, the characters go from being at best indifferent to one another to eventually finding they care for one another.  It’s remarkably funny and amusing to watch.  You also see Miranda go from a recovering “mean girl” to a truly admirable character.

Overall, Tempestuous was an amusing and interesting read.  A fantastic take on a classic with a magic all its own.  Highly recommended to anyone looking for a fun, fluffy read with a little meat to it. 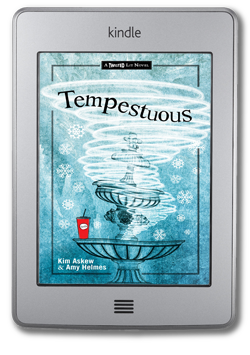