In a terrifying near-future world, a teenage girl goes on the run with her pregnant twin and the boy she secretly loves in order to save all three–or maybe four–of their lives. It’s a story about sisterhood, unconditional love, and the things we learn that explode everything we’ve ever been taught.

Diana Peterfreund’s short story Foundlings is actually a part of the larger Brave New Love YA dystopian anthology, but is also available for individual download.

Taking place in a not-so-distant future, in a world not too dissimilar to our own, women’s reproductive rights have all been stripped away. Pregnancies are carefully monitored, abortion has been outlawed by the government, morning-after pills don’t exist, unplanned teen pregnancies result in young mothers and their unborn babies being taken (i.e. rescued, rehabilitated?) by government agency WOMB – usually never to be heard from again. And set against this world, our unnamed, everygirl teenage narrator begins telling us the tale of her illegally pregnant twin sister and her desperate struggle to save them all from ruin.

Women’s rights? Um. Talk about a hot-button issue, especially after inciting so much national controversy in the recent US presidential election. And while I’m not going to go into a debate of political/religious beliefs, a woman’s right to choose, or the sanctity of life, I will say that I’m approaching these issues from a more conservative standpoint just so you have a reference for where I’m coming from. From where I stand, Peterfreund’s short story is definitely controversial. However, while I don’t  agree with certain viewpoints expressed within this story, there are certainly others I can appreciate… such as the indescribably complex love between sisters. The dangers found within extremism. The dangers of forcing a group of people to live by a strict and merciless worldview. The dangers of aggressive social indoctrination. The loss of personal freedoms. Losing the right of personal responsibility. It’s the nanny state at it’s most literal and perhaps most extreme, and it’s a scary thought to consider no matter which side of the line you fall on.

Overall, an interesting, well-written, hard, controversial little short story that turned out to be more thought-provoking than I originally anticipated; there’s something for everyone to mentally chew on here. And really, isn’t that the point for a story such as this? 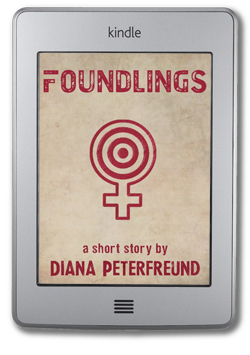