“Every single lifetime, I’ll choose you. Just as you have always chosen me. Forever.”

(I’ve been warned that this review might be considered a tad bit “spoilery” for some.  So…just know that.  Yeah.)

Desperate to know if her love for Daniel is true, determined to discover the truths kept hidden from her, and convinced she can find a way to break the terrible cycle of their doomed love, Luce escapes into an Announcer– alone — after the Thanksgiving debacle at her parent’s house. She suddenly finds herself journeying across centuries, visiting her past lives, reliving each from a distance, and watching her soul fall in love with Daniel’s time and time again. And inevitably watching herself reduced to cinders each time. Every tragic lifetime she witnesses gives her insight into the nature of their love for one another and leads her to more answers…and more questions.

After watching the love of his existence fling herself into the shadows of their past, Daniel frantically follows after, attempting to catch Luce before she can inadvertently alter their history. Daniel races through the centuries, reliving treasured and tragic memories alike, always seeming to be a step behind Luce. Will he reach her before she changes their history? Will they find a way to break the curse? And is their love true?

Having not been a fan of the second book, Torment, I went into Passion with more than a little trepidation. However, for the most part, I found myself pleasantly surprised and this was largely due to Luce’s journey through her past lives. From the horror of WWII Russia to the palaces of pre-revolutionary France to the ancient Mayan temples, we travel with Luce and are introduced to time period after time period. And not just a handful, but bunches. The research Kate had to do in order to write Passion must’ve been quite extensive, and the end result is a breath-taking, fast-paced story that feels grand in scope and rich in detail.

The Fallen series has always been about the romance. It’s always been driven by Daniel’s ageless love for Luce and her matching passion for him in every life, despite the curse that tragically and inevitably separates them. While you’d think the romance might be a little lacking since Luce and her Daniel are separated by distance and time, it’s actually quite the opposite. As Luce observes her past lives from the fringes, and sometimes in a front row seat, we get to see the lovers interact time and time again. It’s romantic, it’s swoon-worthy and Kate is a master at making her reader’s hearts beat just a little bit faster. That said, while I do love the oh-so-dramatic aspects of fated romance, there’s always the danger of taking a scene a just a little too far over-the-top and making it laughably and overly melodramatic. While most of the time my cheese-o-meter was firmly fixed in the safe zone there were a few eyeroll-worthy moments of romantic dialogue.

On the flipside of heart-pounding romance, is that Kate allows the reader to bear occasional witness to Daniel’s incredible heart-ache in the aftermath of losing Luce. It’s heartbreaking and real, and just made me consider the psychological toll that losing someone I loved so completely, repeatedly, would have on my psyche.  I can’t imagine losing the love of my life even once.  It is staggering and deeply saddening and put book two, my least favorite of the three, a little more in perspective. It’s hard to imagine how after all this time, Daniel still clings to the hope that someday things will be different for he and Luce.

If I had one bone to pick about this book – it’s a little more of a personal one but colored my view of the book nonetheless – it’d be the portrayal of God.  (Ugh.  She’s not gonna talk about religion, isn’t she?)  Yes.  I am a Christian and I’m not going to get into an intense theological debate here. But we all view books through the lens of our personal worldview, do we not? I’ll only say this, I hated how God was portrayed as not all-knowing, I hated how the book intimated that Satan was on somewhat equal footing with God, and I hated that it was also hinted at that God required assistance to solve His problems. If you believe in God at all, what’s the point in believing in one that’s NOT omniscient and NOT all-powerful? If God is flawed, if he’s really not much better than us, then why waste your time? I mean, I get it. In the context of the story, if an all-powerful, all-knowing being is written in that can solve everyone’s troubles with a snap of His divine finger, then there’s really not much of a story there, is there? And yes, I know it’s fiction and that Kates’s used what many people consider to be biblical myth and tweaked it to create her own religious mythos.  Don’t misunderstand, not everything has to mesh completely with my views for me to like it, but on this particular point, what she’s created remains so close to what I consider to be actual truth that it bugged me.  Rant done.  Soapbox is safely put away. Whew.

Overall, Passion made me fall back “in like” with Luce and Daniel after the bit of a rough patch that was Torment. Kate has written a  romantic and sweeping tale of true and timeless love that spans lifetimes and is greater than the curse that haunts it. 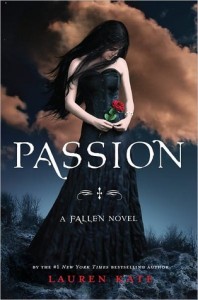 is staggering and deeply saddening.