Following the unexpected death of her father, 18-year-old Layken is forced to be the rock for both her mother and younger brother. Outwardly, she appears resilient and tenacious, but inwardly, she’s losing hope.

Enter Will Cooper: The attractive, 21-year-old new neighbor with an intriguing passion for slam poetry and a unique sense of humor. Within days of their introduction, Will and Layken form an intense emotional connection, leaving Layken with a renewed sense of hope.

Not long after an intense, heart-stopping first date, they are slammed to the core when a shocking revelation forces their new relationship to a sudden halt. Daily interactions become impossibly painful as they struggle to find a balance between the feelings that pull them together, and the secret that keeps them apart.

This is easily one of my favorites of 2012. I read it twice in the same week. Yeah… one of those kinds of books. It’s a story of love, devastating heartbreak, and poetry. Yes, poetry. I consider myself to be someone who is open to all kinds of book ideas, but I was a little hesitant when I saw that poetry played into the plotline. It’s not really something that I’d think to have a book center around, but it. just. works.

Layken
(You’ll find out the story behind her name in the book.) She’s just an incredibly real person. She has a tough exterior, but inside, she feels a lot of pain. She’s not overly outgoing, and I feel like we have similar personalities. She’s expressive, and I really enjoyed following the story through her eyes.

Will
Yum. Excellent book boyfriend. There will be moments in the story where you want to kick him, but when you find out his motives, it’s easy to forgive him. ☺ He’s unusually responsible for a guy in his early 20’s, but for good reason. (We all know girls mature first, so it was nice to read about a guy who’s got a grip on his life.)

The character list gets a little long (about 5 other important secondary players), but each one is so well developed! I can’t even tell you how awesome they all are.

Layken and her family have just moved across the country, after the unexpected death of her father. Layken’s little brother immediately meets his new best friend from across the street, who happens to have an attractive older brother, Will. In his own special way, Will invites Layken out on a date after she’s had a little while to settle in to their new house. (Best first date ever, in my opinion.) Only days later, their relationship is flipped upside down. Hardcore. I audibly gasped. And then re-read it to make sure it really happened. Ms. Hoover is the master of plot-twisting. You have been warned. It happens more than once.

Another warning: this is a pretty heavy book. I did a fair amount of crying. Weeping would be another word to describe the precipitation. I got really attached and took it all personally. Reminds me of that e-card that says, “That moment when you finish a book, look around, and realize everyone is carrying on with their lives as though you didn’t just experience emotional trauma at the hands of a paperback.” This story will do that to you.

It was an emotional rollercoaster, and I loved all of it. There is a second book, which I haven’t gotten to read yet, but Slammed can stand on its own – there’s no huge cliffhanger. So, I’d recommend it for anyone who is okay with a serious read and isn’t looking for a multi-book commitment. Slammed is categorized as New Adult, but I wouldn’t shy away from recommending it to YA readers as well. 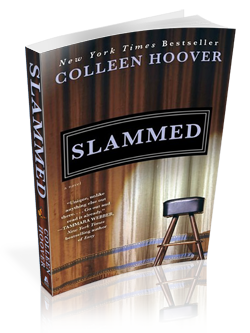