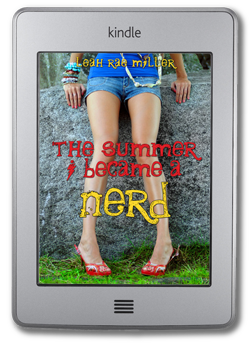 The Summer I Became a Nerd

On the outside, seventeen-year-old Madelyne Summers looks like your typical blond cheerleader—perky, popular, and dating the star quarterback. But inside, Maddie spends more time agonizing over what will happen in the next issue of her favorite comic book than planning pep rallies with her squad. That she’s a nerd hiding in a popular girl’s body isn’t just unknown, it’s anti-known. And she needs to keep it that way.

Summer is the only time Maddie lets her real self out to play, but when she slips up and the adorkable guy behind the local comic shop’s counter uncovers her secret, she’s busted. Before she can shake a pom-pom, Maddie’s whisked into Logan’s world of comic conventions, live-action role-playing, and first-person-shooter video games. And she loves it. But the more she denies who she really is, the deeper her lies become…and the more she risks losing Logan forever.

It’s the age of the geek, nerd… whatever, y’all!  This just sounds… well, absolutely adorkable.

Harriet Manners knows a lot of things. She knows that a cat has 32 muscles in each ear, a “jiffy” lasts 1/100th of a second, and the average person laughs 15 times per day. What she isn’t quite so sure about is why nobody at school seems to like her very much. So when she’s spotted by a top model agent, Harriet grabs the chance to reinvent herself. Even if it means stealing her Best Friend’s dream, incurring the wrath of her arch enemy Alexa, and repeatedly humiliating herself in front of the impossibly handsome supermodel Nick. Even if it means lying to the people she loves.

As Harriet veers from one couture disaster to the next with the help of her overly enthusiastic father and her uber-geeky stalker, Toby, she begins to realise that the world of fashion doesn’t seem to like her any more than the real world did.

And as her old life starts to fall apart, the question is: will Harriet be able to transform herself before she ruins everything?

There’s something so endearing about a girl who is totally oblivious to why no one would like her…when it’s so glaringly obvious to everyone else. I just adore the idea of a character growing into her geeky self. =) 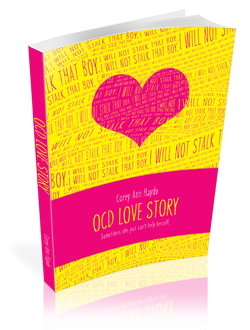 When Bea meets Beck, she knows instantly that he’s her kind of crazy. Sweet, strong, kinda-messed-up Beck understands her like no one else can. He makes her feel almost normal. He makes her feel like she could fall in love again.

But despite her feelings for Beck, Bea can’t stop thinking about someone else: a guy who is gorgeous and magnetic… and has no idea Bea even exists. But Bea knows a ton about him. She spends a lot of time watching him. She has a journal full of notes. Some might even say she’s obsessed.

Bea tells herself she’s got it all under control, but this isn’t a choice, it’s a compulsion. The truth is, she’s breaking down… and she might end up breaking her own heart.

With a cover and title like this, I know I’m going to need to check this one out. It looks quirky, but with a serious edge. Typically, if there’s an obsessive character in a book, they’re the bad guy; this should be a refreshing change for a protagonist.