Seventeen-year-old Groundling, Fennel, is Sightless. She’s never been able to see her lush forest home, but she knows its secrets. She knows how the shadows shift when she passes under a canopy of trees. She knows how to hide in the cool, damp caves when the Scourge comes. She knows how devious and arrogant the Groundlings’ tree-dwelling neighbors, the Lofties, can be.

And she’s always known this day would come—the day she faces the Scourge alone.

The Sightless, like Fenn, are mysteriously protected from the Scourge, the gruesome creatures roaming the forests, reeking of festering flesh and consuming anything—and anyone—living. A Sightless Groundling must brave the Scourge and bring fresh water to the people of the forest. Today, that task becomes Fenn’s.

Fenn will have a Lofty Keeper, Peree, as her companion. Everyone knows the Lofties wouldn’t hesitate to shoot an arrow through the back of an unsuspecting Groundling like Fenn, but Peree seems different. A boy with warm, rough hands who smells like summer, he is surprisingly kind and thoughtful. Although Fenn knows his people are treacherous, she finds herself wanting to trust him.

As their forest community teeters on the brink of war, Fenn and Peree must learn to work together to survive the Scourge and ensure their people’s survival. But when Fenn uncovers a secret that shatters her truths, she’s forced to decide who and what to protect—her people, her growing love for Peree, or the elusive dream of lasting peace in the forest. (Goodreads summary)

Having known only blindness, Fennel has learned to be independent, becoming a capable and vital member of her community and in that of their neighboring – but reluctant – allies, the Lofties. Being Sightless, and therefore mysteriously immune to the Scourge, she’s been raised to take on the role of her community’s water bearer – a terrifying but necessary job. For when the Scourge comes, driving the Groundlings into the dark of their caves and the Lofties into their treetops, forcing both groups away from their source of fresh water, Fennel is the one on whom their survival depends. As one of the Sightless, she can walk among the Scourge. It’s what she’s been trained to do, the responsibility she’s been born to bear.

Fennel. Fennel is one of those characters I instantly connected with; from the opening pages, I just fell in love with her. Fennel exudes such a quiet, steady strength, yet she’s wonderfully feisty at the same time. She’s tougher than she knows, stubborn and duty-driven enough to act despite her fear, and willing to question the status quo. She’s inquisitive, straightforward, but fair-minded, gentle and compassionate.

Though her blindness has robbed her of her physical sight, it’s gifted her with the oft-ignored knowledge that there are different ways in which to view the world around her, in both the literal and figurative senses. Though Fennel isn’t a rebel looking to buck the traditions of her people, she refuses to hold onto to tenets and rules blindly. She questions life as she knows it, interested in determining the truth of things for herself.

You know who else is awesome?  Peree.

Peree. <swoon> Excuse my swoon, but when you read this book I think you’ll agree that Peree is pretty swoonworthy. He’s also the Lofty Keeper who is assigned to Fennel to watch over her as she collects the water. They say it’s for extra protection, but everyone knows it’s just so the Lofties can ensure they’re getting their fair share. But Peree is nothing like Fenn expected a Lofty to be – not arrogant, self-important, or dismissive. Rather, he’s kind, encouraging, genuine, caring and surprisingly funny… and from what she hears, he’s super cute too. He protects her with his bow, and calms her with his stories as she works among the terrifying hoards of ravenous dead. And before she knows what’s happening, she’s become friends with this strange Lofty boy, dividing her loyalties and her heart.

Romance. There’s a reason Romeo & Juliet has endured through centuries, inspiring similar love stories and infinite retellings. That reason is this: we love a romance where the odds are impossibly stacked against the lovers. We have this underlying impulse to believe that love can overcome all things. And such is the case with Fenn & Peree’s romance.

As is always the case in these types of love stories, there are two groups, antagonistic and divided, to which each of the lovers belong. The Groundlings as evidenced by their name, make their homes on the forest floor, while the Lofties prefer the safety of the trees against the Scourge. Between the two communities are long-festering prejudices and a marked segregation that leads to much discord and derision. They’re allies, but reluctant ones. Each new generation of Lofty and Groundling is brought up distrusting the other, continuing the cycle, ever widening the rift between them.  That is, until Fennel & Peree discover that they have more common ground than they realize, and Fenn discovers that the relationship between a Water Bearer and her Keeper is a very strange, enigmatic thing. For all she’s been told about the Lofties – that she shouldn’t trust them – a fragile trust is required between the two. Thus and verily, a bond begins to forge between Fenn & Peree the day she becomes the Water Bearer. But when Fennel realizes that this Lofty boy has stolen her heart, where will her loyalties lie when she’s forced to choose between love and duty?

It’s a conundrum and story device I happen to be a big fan of, and I just love how Peree & Fenn’s friendship-to-something-more develops. It’s a little fast, but not too fast, and I feel that the circumstances make the pace understandable and plausible.

Zombies. Yes, this book has zombies in it, but I wouldn’t consider it a “zombie book” per se. Though the overarching reason for why their lives are the way they are, the zombies play more of a background role – an ever-constant malevolent shadow and a vital piece of the overall world building. So if you run for the bookish hills at the very mention of a possible zombie book sighting, never fear. This book isn’t your typical zombie novel, nor very graphic or violent. It’s more a story of people, of love, of how prejudice can be so mindlessly destructive.

World. Though the world within the microcosm of The Groundlings and The Lofties is pretty fully explained and detailed, we are only given tantalizing glimpses as to the larger picture. Fenn & Peree’s world appears to once have been our world, and while we are given vague details as to what may have caused humanity’s demise, I’m very curious to know more.

Writing. A blind protagonist/narrator? That ought to make things interesting, thought I upon reading the blurb. And indeed it did. It’s very clear that Henley gave a lot of consideration about how to describe and interact with the world from the perspective of one who’s blind, and she executes that through Fenn’s other senses quite wonderfully and quite vividly. It’s easy to imagine the world surrounding Fenn.

Journey. Y’all know I’m always up for a good grab-your-rucksack-and-atravelin’-we-will-go journey, and this book has one of those. 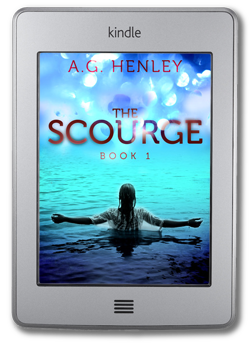 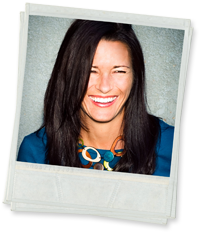 A.G. Henley is the author of the young adult novel, THE SCOURGE. She is also a clinical psychologist, which means people either tell her their life stories on airplanes, or avoid her at parties when they’ve had too much to drink. Neither of which she minds. When she’s not writing fiction or shrinking heads, she can be found herding her children and their scruffy dog, Guapo, to various activities while trying to remember whatever she’s inevitably forgotten to tell her husband. She lives in Denver, Colorado.

30 daily winners will win an e-copy of The Scourge!