If you have not read The Ghost and the Goth, you may not want to continue on, but I’ll do my best to not be too “spoilery.”

After meeting her tragic and untimely end at the front fender of a bus and not yet able to move on to the “light,” Alona Dare, former high school mean queen, is adjusting to her life in the in-between as ghost-talker Will Killian’s spirit guide. Now graduated, Will lives at home, works at Sam’s diner, and together with Alona, he tries to help the dead make peace with whatever unresolved business tethers them to the world of the living. In the midst of one such mission, Will stumbles across the enigmatic Mina, another ghost-talker, and discovers that he is not the only one of his kind. Driven by an insatiable curiosity about his past, his ability, and the uncertainty of his future, Will seeks out Mina and The Order – a secret society of ghost-talkers – against the advice or, more specifically, demands of Alona. Alona, the ice queen, finds herself trying to keep restless spirits at bay while also dealing with the harsh reality that her family is moving past her death… a little too quickly in her opinion. Feeling forgotten and abandoned, she views Will’s new fascination with Mina and her friends as a threat to the one meaningful, and perhaps only true, relationship she has left. As Will pursues what a future with The Order might mean, his confusing relationship with Alona becomes strained, loyalties are tested, philosophies are questioned, lines are crossed, all culminating in a heart-stopping climax that just might change everything.

Why do I love this series so much? Will & Alona. Kade has done such a fabulous job creating both of these characters. The Magnificent Alona Dare is a rehabilitating “mean girl” who places value on appearance, presentation, strategy and power. She constantly views every situation, no matter how small, as a challenge in which she must must gain the upper hand. Life is war, and she must take, win, control and be revered. Alona does not have friends, she has followers and people are merely pawns in a larger game. Her harsh observations of people, insights that she considers motivational and helpful, are often incredibly insulting and devilishly funny. However, her death and fledgling partnership with Will has begun to open her eyes to a view of life she never before considered. Alona is a character that could be completely unlikable due to her selfish, haughty, all-about-me attitude, but Kade does an excellent job bringing out Alona’s rare vulnerable side to make her a more sympathetic character.

Will is an excellent foil for Alona. Often mistaken for a goth, Will spent the majority of his high school career a quiet loner who got his kicks trading barbs with Principal Brewster. For a long time he had trouble coming to grips with his ability until Alona came along and unwittingly helped manage the never-ending slew of spirits needing his help. With Alona filling the position of “spirit guide” he’s reached a much needed workable balance in his life. Will’s wonderfully sarcastic, yet infinitely patient, genuine, grounded and helps attune Alona to the more human side of situations that she just doesn’t seem to understand. He’s not what you’d call a tough guy, but he doesn’t back down from confrontation and he’ll go toe-to-toe with anyone who threatens someone he cares about.

In conjunction with their character development Will and Alona’s interactions are really what makes this novel shine. Theirs is such a fresh relationship dynamic in today’s YA fiction. Typically it seems as though in most YA books, at least that I’ve read, you’ve got the overprotective male figure where the romance is incredibly dramatic and there’s little interaction between the two lovers that leave room for normal or deep conversation. Instead it’s all about the life or death, world-ending drama (i.e. Edward/Bella & Daniel/Luce). Or, we have the bad boy, crackling with sexual tension, who sarcastically goads the girl into liking him but has moments of sweetness that make us collectively go, “Awww…” (i.e. Patch/Nora & Jace/Clary). Don’t get me wrong, I don’t mind those stories – some of them are even my favorites – but those relationship dynamics just seem the most over-used. Will & Alona, on the other hand, are routinely at odds, fighting like cats and dogs, and yet are clearly attracted to each other. As opposed to one of them having obvious control in the relationship, though Alona might dispute this, they both are evenly matched and can hold their own against the other. Their exchanges are witty, snark-ridden and hilarious. The POV switches cleanly between them from chapter to chapter, and gives the reader the opportunity to observe the dueling viewpoints from a first person perspective. Their relationship though unlabeled, whatever it may be, is tempestuous and exciting; there’s never a dull moment between them. Yet when push comes to shove, I’m certain they both will fight for the other, because there’s genuine affection there, though they might be a little loathe to admit it.

I really enjoyed the turn the story has taken with the introduction of The Order, their questionable morality and their motto that the living come first. It makes for some interesting developments in Will’s character, his relationship with Alona, and has him reevaluating how he views the dead. The book largely deals with his internal struggle with his current philosophies and the philosophies introduced to him by The Order. Should the living or dead take priority? Is one more important than the other? And with which should his loyalties lie? Alona takes some issue with the view The Order is touting, and Will’s interest in the group compounded by her personal issues leaves her feeling alone and desperate, causing her to cross a line she may never be able to come back from.

What’s going to happen? Will Will choose The Order or Alona? Well, you’ll just have to read it and find out. <wink wink>

Overall, Stacey Kade’s Queen of the Dead is a hilarious, irreverent, heart-pounding and heart-wrenching must-read that will leave you breathless from laughter and gasping in surprise right to the very last page. 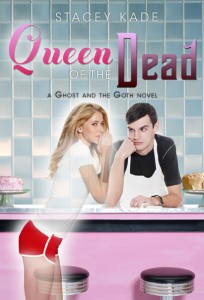 Title: Queen of the Dead

Series: The Ghost and the Goth (Book #2)

Enter here for a chance to win the first book in the series, The Ghost and the Goth!

And remember to enter the YA Indie Carnival Ebook Giveaway!