Traveling through a dark and twisted Northern California, they have only each other to rely on for survival. Together, they journey toward the angels’ stronghold in San Francisco where she’ll risk everything to rescue her sister and he’ll put himself at the mercy of his greatest enemies for the chance to be made whole again.  (Goodreads summary)

Let me start by telling you how blown away I was by this book that cost me just $1.66 on Kindle. Ridiculous.

We meet the main characters in California approximately 2 months after the world has pretty much fallen apart. Brimstone, fire, angel warriors, the whole shebang.

I will warn, this book isn’t for the faint of heart. There’s a fair amount of descriptive gore, and things that creeped me out enough to give me nightmares. (That’s kind of my fault. Never start an amazing book 30 minutes before you’re planning to go to sleep. I didn’t stop until it was finished, and then I stared wide-eyed at the ceiling in the dark. Creepy factor: 7/10)

Protagonist, Penryn
1. Super cool name.
2. Totally and completely kick-butt female lead. I want to shake her hand, but honestly, she kind of scares me. She’s that amazing.
3. Loyalty to the max. Her sister is taken from her and she risks her life about 10 different times trying to get to her.
4. Very adult for being 17. I suppose when the world crashes around you, it’s time to step up. She is the dominant leader of her family unit. I have loads of respect for her.
And the male lead, Raffe
1. Quite mysterious. We don’t get much of his story until more than halfway through. But it works.
2. Ethereal, otherworldly good looks. Literally.
3. Best sense of humor I’ve read in a while. Dry and sarcastic, and I loved every bit of it.

Our other characters were Penryn’s mother, who is a totally fascinating, and Paige, Penryn’s sister. There is adequate character development for each, and they are both important to the story as a whole, which I appreciate. I like secondary characters who mean something.

While I don’t consider myself an astute Biblical scholar, there were a few moments where I cringed at some of the theological interjections. Since it’s fiction and since I didn’t get the impression that Ms. Ee was pushing an agenda, I didn’t let it affect my opinion or overall review.

The only negative aspect to this book is that we don’t get much backstory for the time that has elapsed since the attack on Earth began before we meet Penryn. I can’t say that it left me wanting for a lot more, because the story is complete and could stand on its own, but it might have helped us understand some aspects of the storyline better.

Scratch that, there’s one more negative. I wish this was more of a romance. But I’ll try to just be happy with what it is.

There isn’t much info available on the sequel, as it remains untitled with a vague release date of 2013. 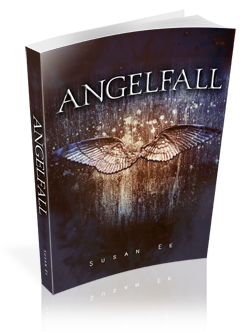