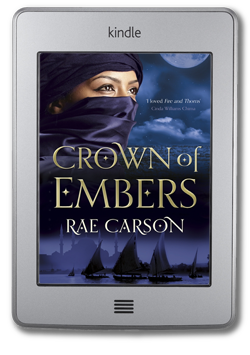 Elisa is the hero of her country. She led her people to victory against a terrifying enemy, and now she is their queen. But she is only seventeen years old. Her rivals may have simply retreated, choosing stealth over battle. And no one within her court trusts her-except Hector, the commander of the royal guard, and her companions. As the country begins to crumble beneath her and her enemies emerge from the shadows, Elisa will take another journey. With a one-eyed warrior, a loyal friend, an enemy defector, and the man she is falling in love with, Elisa crosses the ocean in search of the perilous, uncharted, and mythical source of the Godstone’s power. That is not all she finds. A breathtaking, romantic, and dangerous second volume in the Fire and Thorns trilogy.

“But [he] chuckles deep in his throat, and I feel it all the way down to my toes. Softly he says, ‘My life has ever been yours, Elisa.‘

My limbs tingle and heat fills my cheeks as we stare at each other.”

Getting drunk homecoming night your senior year is never a good idea, but Jake Hayes never expected it all to end with a car crash and a t-post embedded in his throat.

His biggest regret about it all? What he never said to Samantha Shay. He’s been in love with her for years and never had the guts to tell her. Now it’s too late. Because after that night, Jake will never be able to talk again.

When Jake returns to his small island home, population 5,000, he’ll have to learn how to deal with being mute. He also finds that his family isn’t limited to his six brothers and sisters, that sometimes an entire island is watching out for you. And when he gets the chance to spend more time with Samantha, she’ll help him learn that not being able to talk isn’t the worst thing that could ever happen to you. Maybe, if she’ll let him, Jake will finally tell her what he didn’t say before, even if he can’t actually say it.

“Well, thanks for showing me to my class, Jake…” she trailed off.

“Hayes,” I filled in.  It was weird having someone on the island not know who I was.  “Jake Hayes.”

“Nice to meet you, Jake Hayes,” she said, her smile blinding me.

“You too, Samantha Shay,” I said, stuffing my sweaty hands in my pockets.

“Sam,” she said, placing her hand on the doorknob.

Sam may have just stolen my fourteen year old heart.

Following the unexpected death of her father, 18-year-old Layken is forced to be the rock for both her mother and younger brother. Outwardly, she appears resilient and tenacious, but inwardly, she’s losing hope.
Enter Will Cooper: The attractive, 21-year-old new neighbor with an intriguing passion for slam poetry and a unique sense of humor. Within days of their introduction, Will and Layken form an intense emotional connection, leaving Layken with a renewed sense of hope.
Not long after an intense, heart-stopping first date, they are slammed to the core when a shocking revelation forces their new relationship to a sudden halt. Daily interactions become impossibly painful as they struggle to find a balance between the feelings that pull them together, and the secret that keeps them apart.

The second those Darth Vader house shoes meet the snow-dusted concrete, I’m no longer looking at the Jeep in front of me. I’m flat on my back, staring up at the clear blue sky. I immediately feel the pain in my right shoulder and realize I’ve landed on something hard. I reach around and pull a concrete garden gnome out from beneath me, half of his red hat broken off and shattered into pieces. He’s smirking at me. I groan and raise the gnome with my good arm and pull it back, preparing to chuck the thing, when someone stops me.

“That’s not a good idea!”
I immediately recognize Will’s voice.