While trying to save her brother from a witch’s fire four years ago, Greta was thrown in herself, falling through a portal to Mylena, a dangerous world where humans are the enemy and every ogre, ghoul, and goblin has a dark side that comes out with the eclipse.

To survive, Greta has hidden her humanity and taken the job of bounty hunter—and she’s good at what she does. So good, she’s caught the attention of Mylena’s young goblin king, the darkly enticing Isaac, who invades her dreams and undermines her will to escape.

But Greta’s not the only one looking to get out of Mylena. An ancient evil knows she’s the key to opening the portal, and with the next eclipse mere days away, every bloodthirsty creature in the realm is after her—including Isaac. If Greta fails, she and the lost boys of Mylena will die. If she succeeds, no world will be safe from what follows her back…  (Goodreads summary)

Reading the blurb, reading the blurb… ok, ok… wait.  Wha–?  The goblin king is the love interest?  Oh! “Darkly enticing?” Are you sure we’re talking about a goblin? Hmm… I think I must read this…

Maybe it’s just me. Maybe it’s because I’m a dork and played WoW 24/7 years ago like the gamer junkie I used to be (Level 80 Night Elf Huntard, thank you very much), but when I think of goblins they are nowhere even approaching the realm of “sexy”… or “easy on the eyes”… or even “great personality.”

But hey, I was convinced about zombie boyfriends… so maybe I can be talked into goblins.

Here. You want to see what I visualize when the word “goblin” comes to mind? 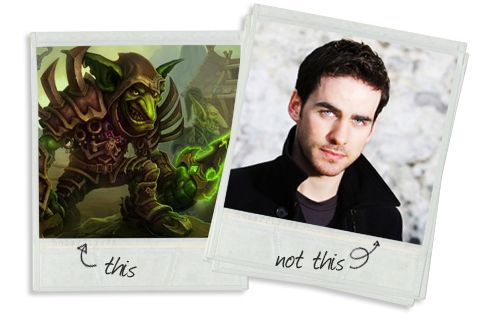 These pictures are not mine.  Goblin dude belongs to Blizzard Entertainment.  And I don’t know who Colin O’Donoghue belongs to, but it’s not me.

Hubba, hubba, right? (Totally talking about the green skin & pointy ears. <wink>) Now you might be wondering… how is this dude-on-the-right possibly a goblin?  Come on now, you say.  Well… Isaac (a.k.a. The Goblin King) doesn’t always look like he walked out of a J. Crew catalogue; his goblin-ness is pretty well explained and believable within the world of Mylena.  And he definitely is a goblin.

And as it turns out, Isaac is indeed the definition of “darkly enticing,” and his interactions with Greta are of the extremely intense, heart-pounding variety. He’s the epitome of alpha male with his raw animal (ha!) magnetism, aggressiveness, and his determination to woo (or possess) Greta. He did make me a little uncomfortable, for several little reasons, mainly because while he’s definitely knee-tremblingly swoon-worthy, trustworthy is another matter entirely.

Greta, the human teenager who found herself sucked into this strange, magical world four long years ago, has been trained as a bounty hunter. She knows how to protect herself, and with good cause, since the general consensus among the residents of Mylena is that the only good human is a dead human. She’s tough, smart, a skilled fighter, she’s been trained to quell her emotions and make quick, logical decisions in the midst of dangerous situations. But with everything that happens to her in this book, it’s interesting to see her struggle with emotions and issues she’s repressed and buried, and realize that perhaps emotion isn’t quite the weakness she’s been led to believe it is.

While this story is definitely enjoyable there were several things that kept me from giving it a higher rating. I really enjoy Chloe Jacobs’ writing style; she’s got a finesse about her style that I like. However, I feel like the plot could’ve been tighter? Deeper? It’s not that I didn’t care about what was going on in the story, but I wasn’t as invested as I wish I could’ve been. Instead of participating in the story, I felt like I was being told a story. If that makes any sense. (Yes, I know that sounds weird.)  I think that, in large part, it also had to do with the relationship development. While Isaac is all kinds of swoony and interesting, I didn’t see enough of him, and of him & Greta together, to really understand why he matters to her so much. Sure. Dude is hot, and a king, and kind of irresistible… but there just doesn’t seem to be any kind of real foundation for the depth of feeling that’s going on there beyond a strong physical attraction. There’s also another guy, and a bit of insta-love that goes on there as well. However, Guy #2’s level of interest in Greta (and vice versa) is a bit more understandable given their circumstances and their interactions.

Don’t get me wrong. This book is a fun read, and I just had to know what was going to happen with both the story and the romance, but I just didn’t have that  emotional connectivity needed to have in order to really love it.

Overall. Despite my issues with the depth of the story and relationship development, Greta and the Goblin King is a fun, action-packed adventure romance… and written proof that indeed goblins can be believable love interests. 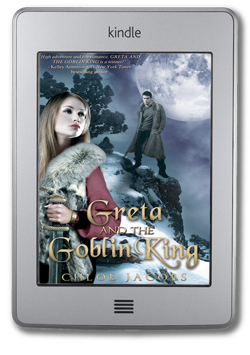 Title: Greta and the Goblin King