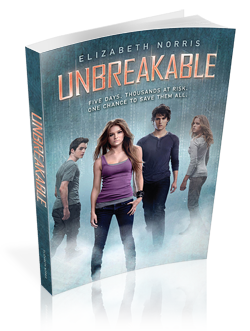 Four months after Ben disappeared through the portal to his home universe, Janelle believes she’ll never see him again. Her world is still devastated, but life is finally starting to resume some kind of normalcy. Until Interverse Agent Taylor Barclay shows up. Somebody from an alternate universe is running a human trafficking ring, kidnapping people and selling them on different Earths—and Ben is the prime suspect. Now his family has been imprisoned and will be executed if Ben doesn’t turn himself over within five days.

And when Janelle learns that someone she cares about—someone from her own world—has become one of the missing, she knows that she has to help Barclay, regardless of the danger. Now Janelle has five days to track down the real culprit. Five days to locate the missing people before they’re lost forever. Five days to reunite with the boy who stole her heart. But as the clues begin to add up, Janelle realizes that she’s in way over her head—and that she may not have known Ben as well as she thought. Can she uncover the truth before everyone she cares about is killed?

I’m about halfway through Unraveling, and I already know I’ll be dying for Unbreakable once finished.  I love Janelle… and I love Ben, and I’m totally invested in the mystery.  Plus, I’ve heard (and this blurb indicates) that Unraveling ends on a bit of a cliffhanger. So… yes.  Must have it. *grabby hands* 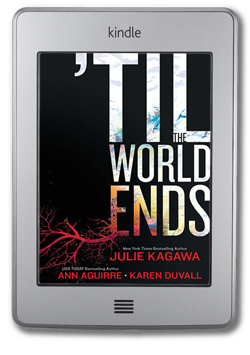 ‘Til The World Ends

Dawn of Eden by Julie Kagawa

Before The Immortal Rules, there was the Red Lung, a relentless virus determined to take out all in its path. For Kylie, the miracle of her survival is also her burden—as a doctor at one of the clinics for the infected, she is forced to witness endless suffering. What’s worse, strange things are happening to the remains of the dead, and by the time she befriends Ben Archer, she’s beginning to wonder if a global pandemic is the least of her problems…

After a catastrophic spill turns the country into a vast chemical wasteland, those who could afford it retreated to fortresses, self-contained communities run by powerful corporations. But for Mari Thistle, life on the outside—in the Red Zone—is a constant struggle. To protect her family, Mari teams up with the mysterious Thorne Goodman. Together, they’ll face an evil plot in both the underworld of the Red Zone and the society inside the fortresses that could destroy those on the outside… for good.

Sarah Daggot has been chasing storms since she was a child. But after the biggest solar flares in history nearly destroy the planet, she becomes a Kinetic, endowed by her exposure to extreme radiation with the power to sense coming storms—in the cosmos and beyond. And she’s not the only one. Sarah believes the Kinetics are destined to join forces and halt the final onslaught of the sun. She’ll vow to keep trying to convince the one missing link in their chain of defense, the enigmatic Ian Matthews, up until the world ends.

I am really excited to find out what happened before The Immortal Rules…and to read anything written by Julie Kagawa. I’m also very interested in the other two stories in this compilation as well since I adore Ann Aguirre and I’ve never read anything by Karen Duvall. =) Super excited for this to release in January!

So what’s the game now? This, or the life I used to know?

When Miki Jones is pulled from her life, pulled through time and space into some kind of game—her carefully controlled life spirals into chaos. In the game, she and a team of other teens are sent on missions to eliminate the Drau, terrifying and beautiful alien creatures. There are no practice runs, no training, and no way out. Miki has only the guidance of secretive but maddeningly attractive team leader Jackson Tate, who says the game isn’t really a game, that what Miki and her new teammates do now determines their survival, and the survival of every other person on this planet. She laughs. He doesn’t. And then the game takes a deadly and terrifying turn.

Months ago, I would’ve sworn I didn’t like sci-fi thrillers. Fortunately, my tastes have changed. Here’s my dilemma: with a plot description like this, how am I going to stand waiting for the second?!