In this stunning sequel to the highly acclaimed Daughter of Smoke and Bone, Karou must come to terms with who and what she is, and how far she’ll go to avenge her people. Filled with heartbreak and beauty, mysteries and secrets, new characters and old favorites, Days of Blood and Starlight brings the richness, color and intensity of the first book to a brand new canvas.  (Goodreads summary)

When I read Daughter of Smoke & Bone this summer, I really had no idea what to expect.  I started it with little background knowledge and was a bit uncertain about its premise.  So, when I say that Laini Taylor sucked me into her world, I mean it in the most truthful way possible.  I was completely wrapped up in it and absolutely fell in love with the imagery and philosopy and captivating, beautiful characters. I was floored by the complexity of the plot, the essence of paranormal and borderline high fantasy world building, and the incredibly heavy issues of love, war, loss, and consequences.  I loved Daughter of Smoke & Bone and had high hopes for Days of Blood & Starlight.  It was everything I wanted and so much more.

I don’t often say that I enjoyed a second book more than the first; however, I can wholeheartedly say that this is the case with this series.  And here’s why:

Plot.  Daughter of Smoke & Bone ends with the startling revelation of who exactly Karou is.  This revelation leaves she and Akiva torn apart emotionally with little hope for a future together.   There is always hope though in Laini Taylor’s world.  We’ll get to that in a minute.  There is a dual world going on in these books.  One is the human world, which is still reeling from the showdown between Karou and 3 angels.  Zuzana and Mik are left wondering what on earth has happened to Karou and Akiva; and Kaz…well he’s still being Kaz…idiot.  Anyway, the other world is Eretz, the land of angels and chimaera.  The land where Akiva the angel fell in love with Madrigal of the Kirin (a chimaera race).  A land that’s only known war.  Though the war is, for all intents and purposes over, there is an rebel uprising with a new resurrectionist.  It is much uglier than the first, much more brutal and the angels will not let these rebels go unpunished…if only they could find them.  As in the first book, the twists and turns left me shocked and excited.  As each piece was revealed, new and incredible things happened.  The adventure and suspense and utter confusion of emotional turmoil was exquisite.

Characters.  Laini Taylor’s characters are not typical YA characters.  There is no formula, there is no easy right/wrong answer.  They are deep and complex and real and therefore, incredibly fun to read.  There are many familiar faces in this book, familiar points of view and settings, but Laini introduces us to some new delightful voices and also expands the characters we got to know in the first book, giving us a deeper understand of what makes them tick.

Karou.  Sweet Karou is a broken, shamed, and bitter character who is a shell of her former self.  The strength she showed before is not overshadow by the her desperation to atone for what she sees as her worst of sins, falling in love with the enemy.  She’s lost her dream of a better future.  A future of peace.  It was heartbreaking and enlightening and gives us as readers a much better picture of the inner workings of the chimaera culture.  Her role in their society is a prominent one now that she’s returned to them.  It has been devastated by the seraphim and she plays a vital role in the rebellion, a worthy cause that she feels will atone for her misplaced trust.  Through it all though, Karou wonders if she is doing what Brimstone would have wanted.  She wonders if the cause she’s serving is as worthy as she’s being led to believe.

Akiva.  On the other side of the battles and on the other side of the world from Karou, Akiva struggles with the loss of Karou and the repeat loss of Madrigal.  He is torn by his ingrained duty to serve the Empire and follow orders as the soldier he is, or to be better and do better by showing mercy to the chimaera.  He longs to be the man (angel?) that Madrigal wanted him to be even though he’s lost her.  He longs to build their dream even if she’ll never stand by his side to live it and even if he will never live long enough to see it himself.  I absolutely adored his character and the dedication he has.  It’s remarkable.

Ziri.  Selfless, devoted, and incredibly endearing, Ziri is one of my new favorite characters.  When Karou feels alone and without allies, Ziri proves himself over and over with a loving, friendship that makes my heart sigh.  I wanted his happiness more than most secondary characters I’ve read.  He is just so rich and full.

Zuzana and Mik.  Eee.  I love them so much.  Zuzana was one of my favorite characters from Daughter of Smoke & Bone so it was wonderful to see more of her character in this novel.  She is the same spitfire  awesome she showed herself to be, but we got to see things from her perspective and see her…well, you’ll have to read it to find that out.  Mik was incredible and I loved getting to know him better and see his relationship with Zuzana flourish.  Happy sighs over their romance.

Liraz and Hazael.  What Laini Taylor does with these two characters is nothing short of breath-taking.  The incredible depth and strength and devotion present in these two is remarkable.  Their development and transformation was everything I hoped for and I’m so happy with the way that played out.  Well, mostly.  I’m going to shut up now.  😉

.Thiago.  No words…just no words…  At least none that I can say without spoiling things.

Jael.  That guy.  He’s the devil.  He’s an angel but he’s the devil.  Work that one out.  Incredibly awesome villain.  Laini makes it so easy to hate that guy.

The romance in Days of Blood & Starlight is rather excruciating.  With some valid reason, Karou has given up on Akiva.  She works with the rebellion to defend the remaining chimaera from the seraphim and to keep herself from thinking of Akiva.  Akiva meanwhile is struggling with his remorse over what he’s done.  He’s broken.  He goes back to his brother and sister (Hazael and Liraz) and has a choice to make:  follow orders as usual or be the person Madrigal wanted him to be whether she is by his side or not.  It’s no happily ever after.  It’s no easy love story.  Karou and Akiva’s love has been “against all odds” since its inception and the future doesn’t look bright…or does it?  <squeee>

One of the most beautiful parts of both the first and second book of this series is the gorgeous strand of hope Laini weaves into her beautiful tapestry of a story.  It’s in the nuances, for example Karou means hope in the chimaera language, and in the overt statements.  It’s in the sympolism and in the undertones.  It’s everywhere you look, especially when things seem hopeless.

Overall, Days of Blood & Starlight is a gorgeously written, vividly drawn, page-turner.  Absolutely recommended for anyone loving a epic tale that is bigger than a romance, unique in its approach to age old creatures, and full of characters you can’t help but love (or hate as the case may be.) 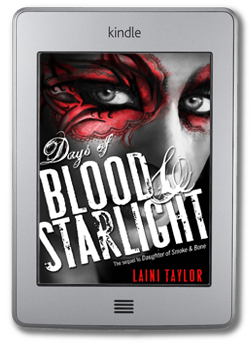 Title: Days of Blood and Starlight