I liked this book, but I was hoping to love it. Seriously, a modern retelling of Persephone has all kinds of potential for being extremely and darkly romantic. Enter Pierce Oliviera. Two years ago, Pierce had a near death experience and the darkly handsome ruler of the underworld claimed her as his own. Like Persephone, she escaped back to the world of the living where….well, let’s just say she didn’t cope well with her brush with mortality. Fast forward a couple years to present day and Pierce has endured endless hours of therapy, has probably swallowed the equivalent of a pharmacy full of pills, has made herself a social pariah in the eyes of her old classmates, has gone through her folk’s difficult divorce, and has moved to back to her mother’s childhood home, an island in the south of Florida, in an attempt to make a new start and to forget about her would-be captor who keeps popping up at the most inopportune times to save her. Turns out she’s moved right into her worst nightmare’s backyard.

I’m not giving away major plot points or the whodunnit, but I might reveal more than you’d want to know if you’re really interested in reading this book for yourself….so abandon hope, all ye who enter here….or just come back after you’ve read it for yourself, so we can compare notes:

Oh where to start…oh let’s start with Pierce and John, but Pierce first. Pierce bugged the snot out of me. True, she had gone through a very traumatizing experience, and it’s understandable that someone might come out of a near death experience drastically changed. But the events that happened in the Underworld; where John, the ruler of the Underworld, (yes…JOHN…we’ll get to his name in a minute) claimed her as his own to stay with him forever, weren’t as terrifying as she built them up to be. True, she was 15 at the time, and I can understand how at that age a forever commitment could seem frightening and daunting, but she was DEAD and it’s not like he was being a monster about it. He wasn’t trying to trap her.  Pierce unjustifiably vilifies John throughout the book, thinking he’s out to get her when really, though I wouldn’t go as far as calling him sweet, he’s only looking out for her and really does care about her well-being. Maybe she vilifies him to ease her own conscience for leaving him the way she did. Pierce is a shallow, an unintelligent, a somewhat selfish character, who lives in a state of stubborn, constant denial. And I just wanna shake her. John, despite having the least terrifying moniker for a death deity ever, is a pretty intimidating guy. Like I said, not warm and fuzzy by a long shot, but he really does love Pierce for some reason that I can’t decipher and protects her from those who mean her harm. You learn tidbits about John and his background throughout the story and I believe his name is an attempt to make him a more sympathetic character.   I really did like John, and he came off as this patient, slightly frustrated, yet long-suffering character as he endured the unstable, emotional Hurricane Pierce. I wish that he and Pierce had had a few more scenes together, because if you totaled up all the time they spent together throughout the book, it probably encompasses about an eighth of the book, maybe less, this includes flashbacks AND present day.

The mystery was interesting.  You had some really interesting aspects of the story that made you wonder how everything was going to come together but when you finally reach the pivotal climactic event unfortunately it just fell flat. I really liked who the villain turned out to be, but how Pierce figured it out felt really contrived; just really bad clues. And for a girl who couldn’t tell from pretty obvious signs that the dark and brooding Lord of the Underworld was madly in love with her, how the heck did she manage to piece together the final conclusion from such random and insignificant details? <sigh> Who knows.

Complaints aside, It was interesting. I liked it just enough to want to read the next one in hopes of it surpassing Abandon. 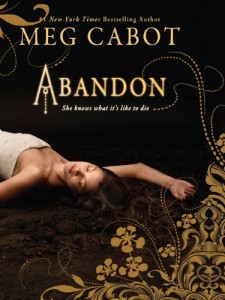