“I won’t tell anyone, Echo. I promise.” Noah tucked a curl behind my ear. It had been so long since someone touched me like he did. Why did it have to be Noah Hutchins? His dark brown eyes shifted to my covered arms. “You didn’t do that-did you? It was done to you?” No one ever asked that question. They stared. They whispered. They laughed. But they never asked.

So wrong for each other…and yet so right.

No one knows what happened the night Echo Emerson went from popular girl with jock boyfriend to gossiped-about outsider with “freaky” scars on her arms. Even Echo can’t remember the whole truth of that horrible night. All she knows is that she wants everything to go back to normal. But when Noah Hutchins, the smoking-hot, girl-using loner in the black leather jacket, explodes into her life with his tough attitude and surprising understanding, Echo’s world shifts in ways she could never have imagined. They should have nothing in common. And with the secrets they both keep, being together is pretty much impossible. Yet the crazy attraction between them refuses to go away. And Echo has to ask herself just how far they can push the limits and what she’ll risk for the one guy who might teach her how to love again.  (Goodreads summary)

Hype. I think that’s why I, shamefully, have avoided reading Pushing The Limits for so long. Whenever someone tells me they think I’ll like a book, my inner snark demon awakens, “Oh, I will, will I? We’ll just see about that. Ok, book, amaze me.” And can I just mention the sheer amount of tears I heard about being shed over this book? They could seriously rival the volume of Lake Michigan. And again I said, “Hey, Katie McGarry, it’s on.  It’s on like Donkey Kong. I refuse to let you make me cry.”

Tears… streaming down my face.

Katie McGarry, you showed me what’s what, because a pile of soggy tissues later, and I’ll freely admit, Pushing the Limits is a pretty amazing story that lives up to the hype.

Multi-layered, authentic, flawed, empathetic and lovable, in Noah & Echo Katie has created two incredibly different main characters whose stories who, both together and apart, are equally compelling. Two different people, from different backgrounds with different goals, realizing perhaps they’re actually more similar than they initially thought. Their separate journeys toward healing, toward completion, toward self-realization begin to merge, and it’s raw yet beautiful, completely heartbreaking, yet freeing. It causes them both to re-evaluate who they are and who they want to become.

I loved watching Noah & Echo as initially they want nothing to do with each other, form tentative bonds with each other, recognizing something in the other that they each need – strength, comfort, encouragement, understanding and, sometimes, just a willing accomplice.

Echo. Echo almost died two years ago – an event that she has no memory of, but one that has left her horribly scarred, mentally traumatized, and emotionally numb. Not being able to remember that night, when everyone else involved seems to know the details, she feels like a vital part of herself missing. That she can’t move on until she remembers. Once one of the school’s “it” girls and dating the oh-so-cute-‘n-popular Luke Manning, she became withdrawn after “the incident,” hiding away from her life before, now a pariah and a loner. But at the start of her last semester of high school, Echo resolves to find out what happened to her once and for all. However, as she begins to discover what happened that fateful night, she begins to understand the sometimes stark differences between reality and perception.

Noah. The stoner foster kid with the face of an angel and the mouth of a sailor. When his parents are both suddenly killed in an accident, Noah and his two younger brothers become wards of the state. His family becomes even more broken, as Noah becomes separated from his brothers, getting passed around from family to family. Noah vows that someday the three of them will escape the horrors and abuses of the foster system to one day be reunited as a family, and he will do  anything to keep his promise.

Noah’s a tough kid, but there’s a sense he wasn’t always this way. Rather he’s had to become this abrasive, sarcastic, slightly-jerkish fringe-dweller to survive until he ages out. He wasn’t in the system very long before he realized that the only person you can really ever rely on is yourself. He’s rebellious, a bit jaded, impulsive, with massive (and understandable) authority issues. But even so, he’s been unfairly judged by most adults in his life since entering the foster care system. Noah’s not one to trust easily given his experiences, but his repeated encounters with Echo leave him unsettled and insatiably curious about the scarred girl with the past full of secrets.

Voice.  Can I just say how much I love, heart, and adore this emerging YA trend of dual perspectives in a romance?

I love, heart, and adore it.

Though I had a few issues distinguishing when the narrative switched between Noah & Echo, this was due in large part to the formatting of the e-galley. However, each of their voices are distinctive enough that I could tell almost immediately when the POV had shifted. Echo’s voice is a little more melancholy, uncertainty – she’s a lost girl – but she also possesses a lot of strength, determination, and a fantastic amount of sass. Noah on the other hand is “cards-on-the-table” bluntly and sarcastically honest, and he’s so believably guy (High five, Katie McGarry!). But his honesty, while making him a very strong figure, also exposes all his fears, uncertainties and vulnerabilities. It was actually Noah in the end that finally made me grab for the tissue box, not Echo. While I connected with both, there was just something so relatable and lovable about Noah that made his story all the more touching.

Story. More than anything, this story is about two people coming to terms with their pasts, finding healing, discovering love, giving life a second chance, making a fresh start – both individually and together. It’s very much a story of emotional growth and coming of age. But it’s also a bit of a mystery in that both Noah & Echo’s back stories aren’t fully revealed at the beginning of the novel. The results of where their respective pasts have brought them are, of course, apparent… but not the cause. Katie does a fantastic job of weaving just the right amount of mystery into her story, stringing me along with tantalizing bits of information as the larger picture becomes more and more clear. Within five minutes of picking up Pushing the Limits, I was completely invested in finding out what happened to Echo. Add in the two wonderful main characters and their fledgling different-side-of-the-tracks type romance, and I was sold.

Overall. I didn’t stand a snowball’s chance. Noah & Echo both took my heart by storm, making me laugh, cry, despair and hope in this beautifully woven story about finding love, healing, forgiveness and closure. 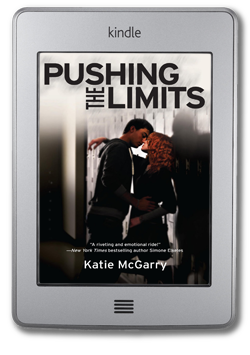