Shade — Love ties them together.  Death can’t tear them apart.

Shift — Their love knows no bounds.

Shine — No other love has burned so bright.

(Taglines in lieu of synopsis to avoid spoilers)

Disclaimer:  As a review of the entire Shade Trilogy, there is the potential for spoilers.  I will try to keep them to a minimum but I am in no way perfect. Be warned.  =)

Seventeen years ago, in the world of the Shade Trilogy, there was an event called The Shift.  Anyone born after this date can see and talk to ghosts.  Anyone born before can’t.  This has caused an entire generation of individuals to grow up dealing with ghosts in their everyday lives.  There are several complications as you can imagine.  The government of course feels the need to “manage” ghosts and has formed and agency to do so, the Department of Metaphysical Purity or DMP, and there are obviously places people would prefer ghosts not visit, like bathrooms for example, so there is a company who has patented technology to prevent ghosts from entering certain areas, called Black Box.  There are other issues like ghosts who become angry and bitter and become Shades etc., but I’ll let you read the series to figure all of that out.  Jeri Smith-Ready does a great job explaining her world without leaving holes so I’ll leave that to her.  =)

The story revolves mainly around three main characters:  Aura, Logan, and Zachary.  <—-yes there is a love triangle, though, in my opinion, a very lopsided one.  Seventeen year olds, Logan and Aura are lifelong friends who have been dating for about a year.  Logan is a pre-shifter and Aura a post-shifter so she sees ghosts but he does not.  On the evening of Logan’s 17th birthday, the two plan to have an intimate encounter which doesn’t end up happening because…well we’ll get to that.

What I loved about this series was Jeri Smith-Ready’s  incredible characterization.  Every single character written feels like a real live person.  From the main characters down to Gina and Megan and Logan’s siblings and Zachary’s parents…everyone was developed to the extent that they really sucked me into the story and let me walk around in their world for a while.

Aura.  Our main character, is a music loving (borderline music obsessed ;)) 17 year old from Baltimore, MD.  She’s fun and spunky but rather indecisive and a little immature.  Her decision making skills needed a lot of work and that bugged me a lot at first.  Thankfully she grows a lot throughout the series which is something I always like to see in a main character.  She’s super smart which also makes me extremely happy.  I can’t stand a dumb heroine.  😉  I felt like she was rightfully confused in Shade so I cut her some slack but I didn’t really LOVE her character.  Then in Shift I felt like I could like her a lot more.  But in Shine well, that’s when I really started to adore Aura’s character.  Her sassiness and true kick butt-ness totally came through.

Logan.  Well, honestly, the dude annoyed me.  Granted, as the reader, I didn’t get the benefit of he and Aura’s history but the glimpses we get of him before his untimely demise and then subsequently after are not all that complimentary.  And as the story progresses in Shade and even a bit into Shift, his character is primarily selfish, manipulative and immature.  He’s a rockstar in the making and totally pulls off the diva attitude which bugged the heck out of me.  I cannot stand cocky, selfish boys.  I get that his life was cut short and everything but it was because of his own stupid choices.  I really just wanted him to get an afterlife and let Aura move on, but that wasn’t really up to me.  😉  By the time he passed on, Zachary looked at me and said, no lie, “Aboot bloody time, aye?”  Aye, Zach, aye.

Zachary.  That boy is a total 5 star book boy.  Smart, mysterious, sensitive, patient, selfless, humble but confident…Scottish.  Basically, he’s the antithesis of Logan and balances Aura perfectly.  He handles Aura indecisiveness with grace and allows her time to make up her mind about their relationship and work through her stuff…which let’s face it, it’s pretty serious stuff.  He doesn’t cut her too much slack but is also patient and not too hard on her.  He calls Aura on her crap but is sensitive to what she’s going through.    Zach isn’t perfect, both he and Aura make some asinine decisions, which is, quite frankly, incredibly refreshing.  He owns up to his mistakes and doesn’t make excuses for them.   An’ ah will nae lie, th’ accent definitely added tae his appeal.  😉  Dude’s Scottish, gotta give him props for that.  I loved the fact that he’s smart and a bit geeky sometimes and yet also adorable, hot, and Scottish.  When you put him up against Logan, Zachary is just the obvious choice, in my opinion.  Did I mention he’s Scottish?

Plot.  Now, plotwise, I’ll be honest, Shade didn’t immediately grab me, hence the 3.5 star rating for that one.  It just seemed very “sex-centric.”  Now wait, let me explain.  Some of you who have read the whole series are probably going “but Shine was so much more sexual!” and I’d agree in some ways, but in Shade Aura and Logan’s story was mainly driven by the fact that they had never gotten to have sex before he died.  The fact that Logan snorts cocaine while drunk to wake himself up so that they can have sex (book boy score based purely on brains:  Logan 0, Zachary 10) is pretty much the overarching theme of their entire relationship.  The other side of the story, Aura and Zachary’s relationship and their mission to figure out the cause of The Shift, etc. is much more interesting but fades into the background because of Logan’s eternal virginity.  Shift is much more balanced, there is way more of the truly awesome storyline between Zachary and Aura and the political intrigue and drama going on, and by the end I was convinced that Shine would be amazing.  In Shine the drama grows to an action packed height with both the political and mystical mystery.  This part of the story is extremely well done and when it comes to the forefront in both Shift and Shine,it really sucked me into the world even more.  Definitely, a worthwhile conclusion which simply took a little while to build.

Romance.  I’ve already told you that I’m firmly on Team Zachary/Team Kilt but here’s why.  I like to see a relationship that has a balance between a healthy amount of friendship and desire for each other physically.  Maybe Logan and Aura had that and because we don’t have their history recorded, we can’t see that as readers, but from what I learned in these books, Zachary an Aura were, in my opinion, a much healthier match.  They each were able to put the other first and they were truly good friends as well as romantically interested in one another.  While Zachary is selfless and quite adorably unsure of himself at times, for the majority of the story, Logan can’t think much about anyone but himself and the fact that he’s “losing Aura.”  Zachary is a much more mature person.  Zachary and Aura’s relationship builds slowly and rather naturally from an instant attraction/connection to an intense love.  There’s no instalove going on.  I understand that Logan is necessary to the story’s development; I just couldn’t muster a whole lot of sympathy for him as a love interest.

Setting.  I have to at least mention the setting because it was just so awesome to me and helped me really dive into these books.  I grew up in Maryland and so I felt very at home in the world of these novels.  Even if you have never been to Maryland, Jeri Smith-Ready does a fantastic job making her world come to life on the page.  If you have though, the world seems even more real.  I could see, feel, taste, smell everything she described in the different places the characters went.  It was awesome.  Loved it so much.

Music.  So many times authors integrate music into their story.  Sometimes it works and sometimes it falls completely flat.  As a music lover myself, it bothers me when authors don’t do this well.  However, Jeri Smith-Ready really does an impeccable job integrating her love of an eclectic mix of music into her characters which adds a beautiful dimension to the story.  It’s done very effectively and without it being obvious what she’s doing.

Overall, this trilogy is a very fun read.  I absolutely loved getting to know these characters and being introduce to Jeri Smith-Ready as an author.  The Shade Trilogy is an enthralling read full of romance, mystery and a hunky Scotsman.  Thoroughly enjoyable.

Mama Note:  Due to quite a lot of language and mature sexual content as well as some drug and alcohol use, I would not recommend this book for young teens. 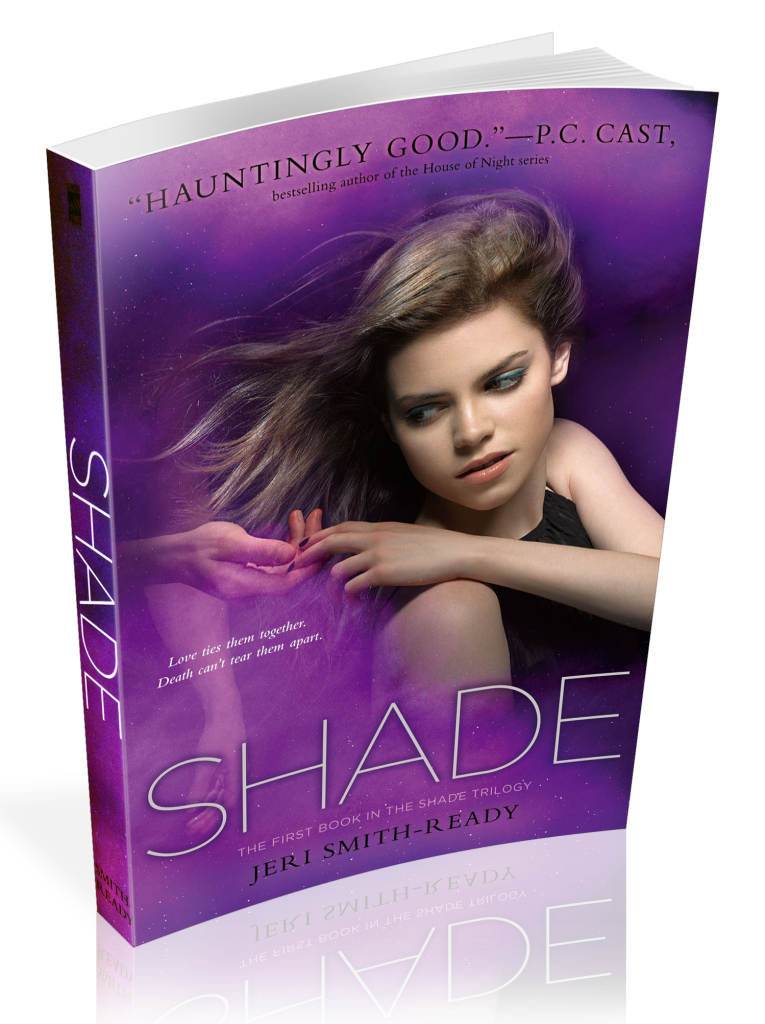 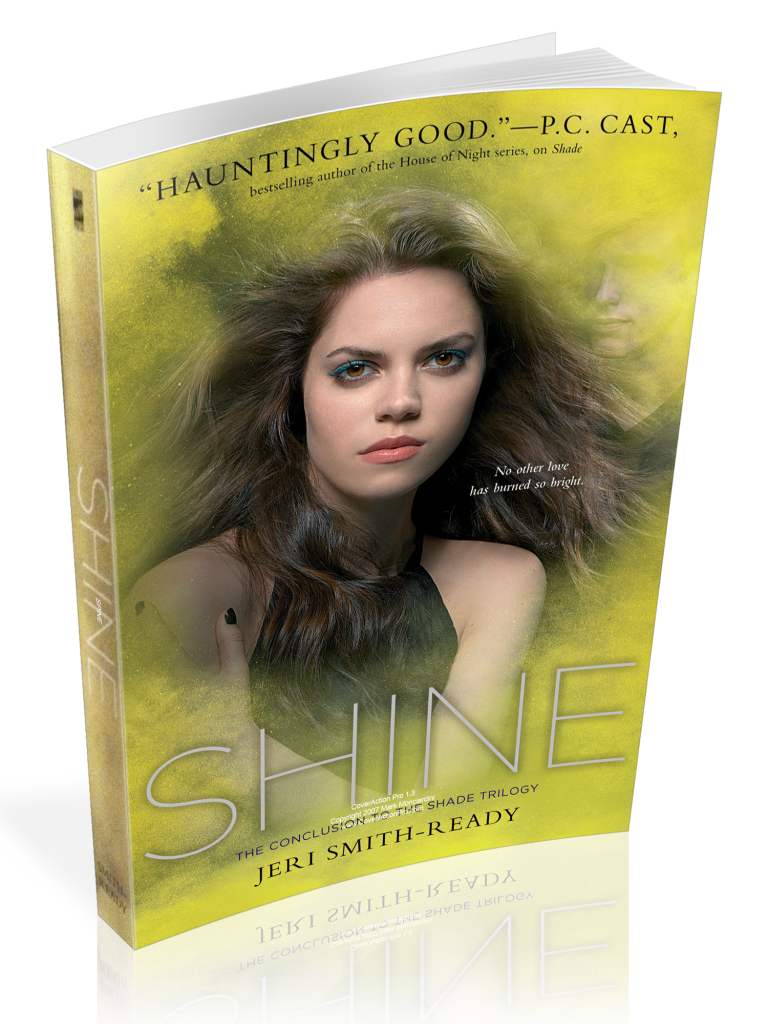