Don’t look at Them. Never let Them know you can see Them.

That is Ethan Chase’s unbreakable rule. Until the fey he avoids at all costs—including his reputation—begin to disappear, and Ethan is attacked. Now he must change the rules to protect his family. To save a girl he never thought he’d dare to fall for.

Ethan thought he had protected himself from his older sister’s world—the land of Faery. His previous time in the Iron Realm left him with nothing but fear and disgust for the world Meghan Chase has made her home, a land of myth and talking cats, of magic and seductive enemies. But when destiny comes for Ethan, there is no escape from a danger long, long forgotten.

I can’t really start this review without first saying how much I adored The Iron Fey series.  It’s been permanently placed on my favorites shelf.  Julie Kagawa has quickly become one of my favorite authors, and so, when I heard that The Lost Prince was coming out, I was both excited and nervous.  I don’t really know why I was nervous as Julie is an excellent storyteller and I have full confidence in her ability to make even fairies believable.  Perhaps it was the idea of Ethan, Megan’s little baby brother from the original series, being all grown up and a perhaps struggling with him being a viable love interest.  Perhaps it was that I couldn’t imagine being in the NeverNever without Ash…and Megan, Puck, and Grim too of course.  😉  However, once again, Julie patted me on the head and said, “Heather, trust me.”   So, I did and I loved it.

As in all of Julie’s books, this book lays the foundation and ground work for the rest of the series.  Her world is primarily already built by the first series but the plot of Call of the Forgotten is just getting started.  It gives you just a glimpse of the potential that the series holds.  I would compare it to The Iron King and The Immortal Rules in terms of plot development   The potential is there for the same epicness and it would be unfair to compare this book with the entirety of the original series.  The lines are being drawn, the battles being laid but they are not complete.  There’s an epic quest afoot and I sense an ultimate sacrifice down the road.  Since Julie loves to make me go through a box of tissues in her series’, I’m sure that’s ahead of us as well.  The Lost Prince lays the perfect foundation for the rest of the series and gives the reader plenty of questions to launch into the next book.  I have no doubt that Julie can and will deliver as she has time and again.

Character-wise that book is fantastic.  Ethan is no little boy anymore.  He’s grown up still seeing Fae when no one else can.  Megan, for reasons discussed in Iron Prophecy <I highly recommend reading that before reading The Lost Prince>, has pretty much abandoned her mortal family with little explanation.  He hasn’t seen her in years and has grown quite bitter because of her abandonment and the Fae who won’t leave him alone.  He’s angsty and broody but in his core he’s a good guy who just wants to protect his family and others from being dragged into Faery as he and his sister were.  Ultimately he’s lonely and is lost as to a safe way to change that.  In walks, Kenzie, a beautiful,  spunky, and persistent girl who has dreams of being a journalist.  She won’t give up on befriending Ethan, despite his broodiness and downright rudeness to her.  She sees past his façade and continues to pursue is friendship, which is something Ethan sorely needs.  Keirran, Ash and Megan’s son,  is a character I can’t wait to see more of.  I feel like there is so much potential in his character and his relationship with Ethan.  They have all the makings of an Ash and Puck duo which makes me all kinds of happy and excited.  I do so love a good bromance.  =)   I absolutely adored how Julie worked in all of my favorite characters from the original series as well.  Everyone I loved makes an appearance but it’s not their story.  Julie does a great job of keeping them in the background, giving us just the taste of their stories that we needed, and makes the story Ethan, Kenzie and Keirran’s…well, for the most part.  There is this one scene at the the end, where this one favorite character swoops in and steals the show, but he can’t really help it.  It’s his nature.  😉

All in all, Julie has done a wonderful job, yet again, creating characters I can love in a world I’ve never wanted to leave.  I’m thrilled to be back in the NeverNever and can’t wait for the next installment of this epic tale! 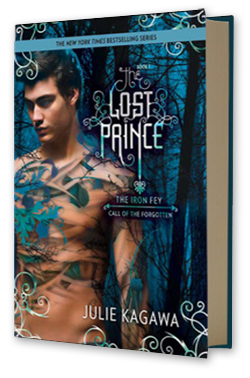 Series:  The Iron Fey — Call of the Forgotten