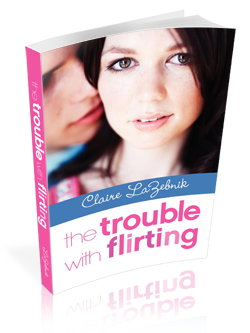 The Trouble With Flirting

Franny Pearson never dreamed she’d be attending the prestigious Mansfield College Summer Theater Program. And she’s not, exactly. She’s working for her aunt, the drama department’s costume designer. But sewing her fingers to the bone does give her an opportunity to spend time with her longtime crush, Alex. If only he was as taken with the girl hemming his trousers as he is with his new leading lady. When Harry, a notorious flirt, shows more than a friendly interest in Franny, she figures it can’t hurt to have a little fun. But why is Alex suddenly giving her those deep, meaningful looks?

In this charming tale of mixed messages and romantic near-misses, Claire LaZebnik (author of Epic Fail, inspired by Pride and Prejudice) has cleverly reimagined the world of Mansfield Park, crafting a fun, engaging romance, filled with witty narration and fantastic banter. Flirting might be more trouble than Franny ever expected, but fans of Susane Colasanti, Stephanie Perkins, and of course Jane Austen will agree that it makes for an irresistible read.

I love Mansfield Park… love the idea of two people who’ve known each other for awhile, suddenly seeing each other in a whole new light.  And after reading LaZebnik’s fabulous Epic Fail, which is a modern day YA retelling of  Pride & Prejudice, I’m practically bouncing off the walls with excitement to find out how she’s going to update this beloved story!  I love that Claire’s run with the whole theater theme from Mansfield Park, and cannot wait for the drama and hilarity that is sure to ensue!  Bring on the drama…. 😀

P.S.- Claire, I’m crossing my fingers that a Persuasion retelling is in the works.  Just wanted to put that out there… <wink>

If I Should Die

I will not lose another person I love. I will not let history repeat itself.

Vincent waited lifetimes to find me, but in an instant our future together was shattered. He was betrayed by Violette, someone we both called a friend, and I lost him. Now Violette is determined to rule over France’s immortals, and she’s willing to wage a war to get what she wants.

It shouldn’t be possible, none of it should be, but this is my reality. I know Vincent is somewhere out there, I know he’s not completely gone, and I will do anything to save him.

After what we’ve already fought to achieve, a life without Vincent is unimaginable. He once swore to avoid dying—to go against his nature and forsake sacrificing himself for others—so that we could be together. How can I not risk everything to bring my love back to me?

Given the way Until I Die ended I am so excited to find out what happens next. Plus, she just announce that she is writing a short story or novella on one of the secondary characters from the series to be released right before If I Should Die! Super excited to find out how this series will end. 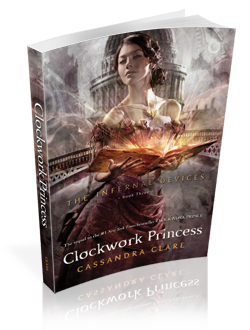 If the only way to save the world was to destroy what you loved most, would you do it?

The clock is ticking. Everyone must choose.

Danger closes in around the Shadowhunters in the final installment of the bestselling Infernal Devices trilogy.

I’ve been so distracted with all our other supernatural book friends lately that I’ve forgotten about how badly I want to read Clockwork Princess. I don’t remember Clockwork Prince having a huge cliffhanger ending, but I read that last Christmas. It’s been 10 whole months since I spent time with those characters, and it’s time for more! Alas, March 19th, 2013 is still pretty far away…