Theia Alderson is a proper British girl who does what she’s told. Her free-spirited mother died in childbirth and her relationship with her still-grieving father is strained at best. Years of rules, regulations, expectations and limited freedoms have molded her into a creature she doesn’t recognize, and she doesn’t know anything else.

And then, it all changes with the appearance of the burning man and an alluring stranger who haunts her increasingly macabre dreams.

The way Falling Under begins it could’ve quickly gone down the road to cliche-ville. Luckily for us readers, Hayes takes a few twisty turns that make her story stand out beautifully. I mean, normal girl who’s lead a  mundane, normal life so far is suddenly introduced to the exciting, mysterious new boy at school. Inevitably, the new boy is incredibly sexy and causes heart palpitations and sweaty palms upon mere eye contact. And, just as inevitability, this heart-stoppingly, gorgeous boy passes by the vacuous cheerleading hotties who are already throwing themselves at his feet, because he only has eyes for our quiet, modest little heroine. It’s definitely not a new idea in YA paranormal fiction. But like I said, the story just starts there, doesn’t stay there, and the twists and turns make this an exciting and fresh YA read.

One of the reasons this story really stood out to me was the development of Theia. It was just so beautifully, believably and gradually done. She’s a character who is scarred by heartbreak, and her view of herself is damaged by her father’s inability to come to terms with his own losses. Mr. Alderson holds Theia at an emotional arms length never getting to know his daughter or allowing her to become who she truly is, frightened both at the prospects of losing her and of getting close at the same time. So needless to say, this girl has grown up with A LOT of baggage, feeling like her father blames her for her mother’s death and feeling like she has never been truly loved. However, as her relationship with Haden progresses, she discovers her inner strength and allows herself to slowly emerge.

The duality of Haden himself is quite interestingly portrayed…and I won’t give too much away at the risk of being spoiler-y, but he is just a delicious leading man. Vulnerable, wicked, loving, anguished and predatory all at the same time, Hayes has created just a wonderful character in Haden that appeals to my inner-romantic.

The secondary characters are also fleshed out well. I love reading a story in which I get to know a character so well that I can predict what their reaction will be before I read it, and Hayes has done a spectacular job of giving her supporting cast dimension and heart. Not just creating a few cardboard cut-outs that make our heroine/hero more noticeable.

The world Hayes has created is beautifully macabre, horrifying and mysterious. Her imagery is so vivid that you have no trouble imagining this strange world in which Theia finds herself…and it might just give you goosebumps 😉

All in all, a delightful read that left me anxiously awaiting Dreaming Awake! 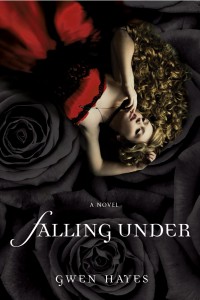