Aiden St. Delphi will do anything to save Alex.

Even if it means doing the one thing he will never forgive himself for.

Even if it means making war against the gods.  (Goodreads summary)

Seriously, it’ll spoil Deity for you. So unless you’re the kind of person who reads the last page first <side eye>, you really don’t want to be here.

After that jaw-dropper of a cliffhanger in Deity, I’ve been dying to find out what happens next.  I’m pretty sure I could’ve survived (though just barely) not knowing what happens to Alex & Co. until Apollyon. I could’ve done it with the help of multiple rereadings, bulk packages of tissues, endless pints of mint chocolate chip, and a self-imposed, home remedy for nail biting. Maybe. But did I want to?

As you might remember from my Deity review, snarky, tough, smart-mouthed, completely rash Alex took a while to grow on me in this series. I always liked her enough, but it wasn’t until Deity that I fell in love with her character. She matured, she thought before she acted, she was sacrificial and used better judgment, while still retaining that essential spark that makes her so lovably Alex. From Half-Blood to Deity, her maturation as a character is just so well done and organic. It might sound strange, but if I hadn’t been so “eh…” about her character in the beginning, I’m not sure I’d love her as much as I do now.

However, now fully awakened as the Apollyon, that Alex is virtually unrecognizable, and it appears as though her greatest fear about awakening to her powers, completing her connection to Seth, may not be wholly unfounded. As her friends and loved ones witness her transformation, they know they must find a way to break her connection to the First. But when it becomes clear that they must choose between one unforgivable course of action or another, Aiden must choose between his love for Alex and his duty to the gods.

I love that this novella was from Aiden’s point of view. Finally! We get a glimpse inside his head! Aiden’s a hard nut to crack. He’s so outwardly steady, stoic – it’s really hard to ruffle Aiden St. Delphi’s feathers. Then along comes the one person who manages to do it on an almost daily basis – Alex. The depth of his feelings for Alex, the lengths to which he’s willing to go to keep her safe, his grief, his alternating moments of hope and hopelessness, his anger, his protectiveness, even his infuriating self-discipline – it all speaks volumes as to just what Alex means to him, and I loved seeing just how he feels for her firsthand. It’s absolutely adorable but also extremely heartbreaking, and I, for one, hope there will be many more Aiden POVs <elbow nudges Jennifer>

I know there have been… <ahem>… mentions of how “boring” Aiden is compared to Seth – an opinion which I’ve never really understood. But after being in his head in this little novella, I’m not sure how anyone could ever think that again. Whatever else Aiden may be, boring isn’t it. More like “Bone-Meltingly Dreamy, Super Kick-Butt Sentinel of Awesome.”  I didn’t think it was possible to fall more in love with Aiden.  I was wrong.

Overall, with a title that foreshadows the dark and ominous, Elixir more than delivers on that promise while also giving readers a tiny – but bright – sliver of hope to grab on to, amping up the drama, and ultimately setting the stage for Apollyon. 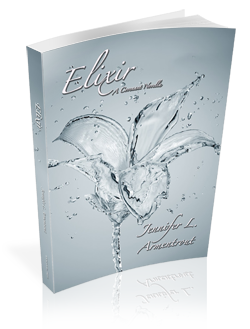