Note:  For my Short ‘n Sweet Week reviews I’m going to cover three short ‘n’ sweet pieces from series that I absolutely love.  They are all extra content or “bridge” works that connect the dots between stories.  With extra content there is a wide range to the level of necessity of the piece to the series as a whole.  For each review I’ll post a “level of necessity” rating at the bottom of my review.

.WARNING:  If you haven’t read Shatter Me, this review could very easily be spoilery.  So, proceed with caution.

After reading Shatter Me this spring, I was reeling.  It blew me away with its poetic language and incredible characters.   I couldn’t wait for Unravel Me.  When I found out Tahereh Mafi was publishing a novella from Warner’s perspective I was thrilled.  To be honest, I liked Warner in Shatter Me.  Granted, he was the villain and a bit of a pyscho at times, but I just couldn’t shake the feeling that there was more to him.  He’s what I like to call a sympathetic villain.  Now, that being said, I still wanted Juliette to end up with Adam.  I was simply intrigued by the idea of understanding Warner better.

In some ways, I am very conflicted by this novella.  I loved getting to know Warner.  I loved getting to see glimpses of Juliette’s journal and get a deeper understanding of her character even though she’s not really in the novella.  It was very interesting to me to see his interpretations of events that Juliette and Adam saw extremely differently.  It was also interesting to see the Reestablishment from the prospective of someone in power.  I love the politics of this society.  But most of all I love Warner.  He is so broken, such a little boy in a man’s body.  His life has been terrible and can relate to Juliette in that way very easily.  However, he’s chosen a very different road than Juliette, despite their similar circumstances.  Also very interesting is the appearance of Warner’s dad.  He is the devil and can rot.  I am so disgusted by him…sigh…I don’t have words for that man.

The writing is every bit as gorgeous as Shatter Me, but it’s very different since it’s from Warner’s perspective rather than Juliette’s.  While Juliette’s mind is spinning out of control, on the brink of despair and insanity, Warner is tightly controlled and managed.  He examines every detail and searches every thought.  He is wound tight and is rarely startled or surprised by anything.  Therefore his feelings for Juliette has left him shattered and destroyed, dare I say unraveling…yes, this is intentional.

The amazing thing about Tahereh’s writing is how she makes you feel everything the character is feeling.  She throws you into the character’s mind and you go every step of the way with them.  It is incredible.  I felt Warner’s heartbreak, his obsession, his hurt, his past.  Every bit of this story clung to me as I read.

My conflict over the story comes from the fact that, even after reading Destroy Me and Unravel Me(I got an ARC a few weeks ago…oh my goodness, it’s incredible) and even after sympathizing and loving Warner, I still want Juliette to end up with Adam.  Don’t get my wrong, I don’t want Warner unhappy or more broken than he is now, but he’s not right for Juliette in my opinion.  Sigh…I’m glad these choices are not really up to me.  =)

Level of necessity:  8 out of 10  While you could read this series without this novella, you’ll understand Warner’s character and Tahereh’s character arcs in Unravel Me much better if you do.  Besides, it’s awesome.  =) 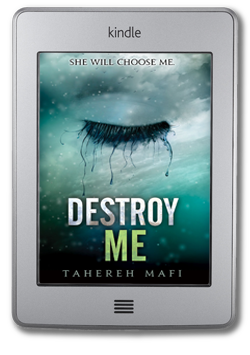