Before Kai joined the Cloud Fleet, he wandered… AMONG THE NAMELESS STARS

Four years before the events of FOR DARKNESS SHOWS THE STARS, the servant Kai left the North Estate, the only home he’d ever known, and Elliot North, the only girl he ever loved, in search of a better life. But the journey was not an easy one.

A prequel to For Darkness Shows the Stars, Among the Nameless Stars takes place four years prior to Kai’s return to the North Estate and tells the story of his escape from slavery, his flight south and his new life in Channel City. Betrayed by the girl he loves, Kai bitterly sets out to pursue his dreams of freedom alone, but the further he travels the more he begins to fear that perhaps his wishes of a better life free of the estate were hopelessly naïve. Is life for a Post just trading one form of slavery for another, or is there hope to break out of the oppressive social cycle created by the Luddites?

Is Among the Nameless Stars necessary for understanding the novel? As much as it pains me to say it, no. This story mostly serves to fill in non-essential gaps alluded to by Kai in For Darkness Shows the Stars. However, if you’re like me and like to know as much as the author allows you to know about the books you love, I would definitely, definitely, definitely recommend reading this anyway. It’s fantastic character development for Kai. It gives a lot more insight into him as a person, why he thinks and feels the way he does, why he makes the choices he does, and why he feels so betrayed by Elliot.

One of the reasons I love For Darkness Shows the Stars so much is the letters Elliot and Kai pass back and forth. They’re so beautiful, so raw, so real. In my experience, letters allow the one writing them to more eloquently and, sometimes, more accurately express thoughts and feelings, and Elliot’s and Kai’s letters add a depth of emotion, a spark of humor, a wistfulness, and a deep longing (both for change and for each other) that just really resonates and makes both stories poignant and powerful. Kai’s letters are admittedly a bit one-sided in Among the Nameless Stars, but it proves to be all the more deeply moving because of that. He feels betrayed by the one person who loves and understands him, and despite it all he still loves her. And the conflict is apparent, heartbreaking and compelling.

Overall, Among the Nameless Stars is a wonderful companion piece to For Darkness Shows the Stars that provides a richer, more complete knowledge of of Kai’s character and of the overall world in which he lives.

Read it for free at Harper Collins 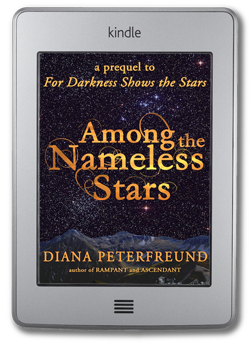 Title: Among The Nameless Stars