When rebellion destroys the underground world in which Thimble and Stone have grown up, they take Stone’s son and try to escape the chaos. Along the way, they must evade the Freaks, beings who feed on human flesh. Leaving behind the roles of Builder and Breeder which they were assigned at birth, they wander the underground tunnels, looking for safety yet afraid to go “topside” where legend has it that the light and water will burn their skin from their bones.

Their journey takes them upward to an unimagined world of tinned food, comfortable furniture, and books. Away from their regimented society for the first time, and still facing imminent danger, Thimble and Stone acknowledge the forbidden attraction which both have denied for years. (Goodreads summary)

When I first learned that Ann Aguirre had written a novella featuring Deuce’s best friends, Thimble & Stone, I was very excited. I had grown to care for both of them in Enclave, and was saddened when we were forced to leave them behind with the circumstances of Deuce & Fade’s exile. And I was curious as to what had become of them with the possibility of an impending Freak attack looming over the College enclave.

This is that story.

Turns out that Deuce & Fade’s forced exile left a bitter taste in the mouth of many College citizens who’ve long felt that their leadership was becoming corrupted. Violence erupts from the discontent and leaves the colony floundering and vulnerable to the Freaks. Their world shattered and unrecognizable, Thimble, Stone & Stone’s son, Boy23, must venture outside of the only home and world they’ve ever known.

One of the reasons I liked this novella so much was that in the wake of destruction, Stone & Thimble are given the opportunity to discover who they are outside of their enclave-designated roles of Breeder and Builder. Both of them struggle with the feeling of being pigeonholed in a role that doesn’t quite fit, that doesn’t encompass everything they are or hope to become. They struggle with a role that attempts to define them as individuals, and because they both have additional difficulties – Thimble’s gimpy ankle and Stone’s learning disabilities – they’ve both experienced cruelties, mockery and derision concerning their abilities to effectively contribute to their community. But out in the tunnels, they’re discovering that the enclave’s way of life may no longer be relevant.

So does Endurance contain information necessary to the larger, overall story? Well, because I’ve been wondering what happened to Thimble & Stone, it’s necessary for me. But as far as the the overarching series’ plot, I’m not sure as I’ve not gotten the opportunity to read Outpost yet.

Possibly, though. “Possibly.” is going to be my final answer.

Overall, a beautiful story of self-discovery and love, Endurance is an action-packed, emotionally-charged addition to the Razorland series. 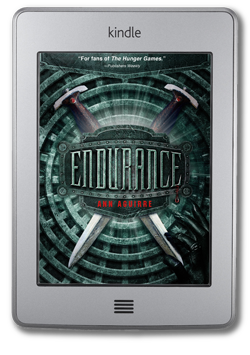 I also ran across a very short, but very swoon-worthy, POV scene that Ann wrote from Fade’s perspective that you should definitely check out…