On Roanoke Island, the legend of the 114 people who mysteriously vanished from the Lost Colony hundreds of years ago is just an outdoor drama for the tourists, a story people tell. But when the island faces the sudden disappearance of 114 people now, an unlikely pair of 17-year-olds may be the only hope of bringing them back.

Miranda, a misfit girl from the island’s most infamous family, and Phillips, an exiled teen criminal who hears the voices of the dead, must dodge everyone from federal agents to long-dead alchemists as they work to uncover the secrets of the new Lost Colony. The one thing they can’t dodge is each other.

Roanoke. The oldest and one of the most compelling unsolved mysteries in the history of the United States.

A brief synopsis…  It’s 1587 and the British colony of Roanoke… well, they’re in trouble. Things in the New World aren’t going so well. In desperation, the governor, John White, sails back to England to get help. However, because of a little disagreement between the Brits and the Spanish, he wasn’t able to get back to Roanoke for three whole years (re: a little thing called the Spanish Armada). When White finally did make it back to his colony, the settlement was empty. Not a trace of the hundred odd souls he’d left behind could be found, and among them White’s daughter and grand daughter. The only clue as to their whereabouts was the name of a local Native American tribe, “Croatoan,” that was scratched into the wood of the fort. The settlers were never found and to this day no one knows the truth behind the disappearance, leading to much speculation and well… creepy and mysterious books like this one.

Who ever said history was boring? <wink>

Town outcast, Miranda Blackwood is used to the whispers, the condescension, the pitying stares. Her reject status determined long before she was even born; her notoriety earned merely by a fault of family heritage. But when she suddenly starts seeing unexplainable things, she has to wonder just how “freakish” she truly is. Meanwhile, town bad boy and outcast-by-choice, Phillips Rawling, has been attending a reform school in Kentucky for the last three years, but when 114 people go suddenly missing in his hometown of Roanoke – eerily similar to the disappearances over 400 years ago – his desperate police chief father brings Phillips home. And why? Because Phillips hears the voices of Roanoke’s past. It’s the reason he left, and he and Miranda may just find that they’re more tied to this island than they ever imagined.

Miranda.  Her dad currently starring in the role of “pathetic town drunk” and her beloved mother deceased, Miranda has essentially taken care of herself (and her dad) for years. The entire town views her with a mixture of apprehension and pity – a good-for-nothing from a screwed up family – based simply on her luck in the genetic lottery. Because of this, she’s largely friendless – alone in the world. To compensate for this lack of companionship and love, she fills her time faithful dog Sidekick, her job at the local theatre, and countless TV show marathons – Miranda has an adorkable wealth of pop culture references. But still, it’s not enough to fill the void. She’s strong and tries to pretend it doesn’t bother her, but she’s lonely and misses her mom terribly.

Phillips. He hears dead people. <creepy whisper>Not knowing how to handle his unique…um… ability, Phillips instinctively knows that getting sent away from the island will calm the hurricane of voices swirling around in his head. At heart a good kid, he begins acting out in very public ways in order to make that happen. As I said he’s actually a pretty decent guy and he loves his parents a lot. He’s snarky, funny, intelligent, a strategist – charming but tough. Thinking on his feet, Phillips has an “I’m gonna roll with it” personality. And despite everything he’s seen and experienced, he’s still a glass-half-full kind of guy. He, like Miranda, is also sweetly dorky.

Let’s be adorkable… together.  Miranda and Phillips’ relationship is one that builds both quickly and slowly. Miranda is the girl Phillips never could quite shake and never forgot when he went off to Kentucky. Alternately, Phillips is an enigma to Miranda – the boy who once upon a time publicly humiliated her, but then looked at her with a sense of empathetic understanding. She doesn’t know to make of him, and so settles on “wary.” Phillips, though reluctant to return to the island, does so because he feels Miranda is in danger, and it turns out he may be right… At first, their “partnership” is one of coincidence and convenience, but these two slightly awkward loners may just find they understand one another in ways no one else ever has.

A long time ago… I love well-researched books that make history interesting, and especially histories’ mysteries. But those of you who tend to groan when the mention of “history” comes up… never fear, this book is not overly historical or overly-saturated with weighty historical facts. In fact, if I didn’t know that Blackwood was based on actual occurrences, I’d just think it was a clever bit of original world building. But because it is based around a historical event and an extremely mysterious and possibly tragic occurrence in America’s past – one that’s always interested and slightly creeped me out – for myself, there was that added an extra level of “Oh, I must read this book!” excitement when first venturing upon Blackwood.

From time to time, I found the story a tiny bit hard to follow as Blackwood is told in the third person and follow both Miranda and Phillips’ thoughts, which sometimes tend to ramble. But it’s part of what lends this book so much charm… and it also could be chalked up to formatting issues in the e-ARC.

The build up of the mystery was very interesting and the mystery well-paced. Bond increases the level of tension, unease and creepiness very well. The only issue I really had with the pacing was near the end – it slowed and was a little strange. But all in all, the climax and conclusion were well done.

Overall. With two endearing and lovable main characters and a creative supernatural spin on a very real historical mystery, Blackwood is a well-crafted and intriguing paranormal explanation of the events surrounding the lost colony of Roanoke. 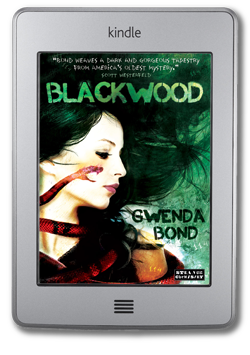