She won’t rest until she’s sent every walking corpse back to its grave. Forever.

Had anyone told Alice Bell that her entire life would change course between one heartbeat and the next, she would have laughed. From blissful to tragic, innocent to ruined? Please. But that’s all it took. One heartbeat. A blink, a breath, a second, and everything she knew and loved was gone.

Her father was right. The monsters are real…

To avenge her family, Ali must learn to fight the undead. To survive, she must learn to trust the baddest of the bad boys, Cole Holland. But Cole has secrets of his own, and if Ali isn’t careful, those secrets might just prove to be more dangerous than the zombies… (Goodreads summary)

Despite some rather clever nods to Lewis Carroll’s classic, Alice in Zombieland has very little to do with the story it derives it’s name from. Although the theme of being lost in a strange, wholly surrealistic reality is definitely a shared, resonating theme, and Gena does a great job of conveying a very unsettled, creepy feeling throughout the story as Alice attempts to discover the truths behind her life as it is post-car accident.

Alice. Alice is an interesting character. Broken, shattered, fragile, yet still strong, tough and brave. She’s got a fierce inner strength that refuses to give up, even when she really wishes she could. True to her Carroll counterpart, our Alice finds herself lost, though more emotionally than physically. But her new found abilities, meeting Cole & Kat, having grandparents who are unwilling to give up on her, along with the unyielding desire to avenge her family, helps her heal and gives her a clear purpose and direction.

Hello, Mr. McBroody Eyes.  Oh, Cole Holland. You are shiver-inducingly appealing, though your communication skills with girls who want to kiss you kinda suck. You try to pawn yourself off as a bad boy and everyone at school is scared of you, but I’m just not seeing why.

Could you take on the entire football team by yourself? Probably.

But I just never got the “scary” vibes from you. You’re loyal and fiercely protective of your friends and loved ones. You’re stubborn and like to get your way, sure, but you’re also kind, extremely patient and can be very gentle. Dude… underneath the rough and bruised up exterior, you’re actually a pretty good guy. But don’t worry, I won’t tell anyone… except for, you know, the people reading this. Except, of course, for them.

The Cheshire…Kat?  Ok. Gotta say. I liked Alice a lot, but Kat? I love, love, love Kat. She is the spunk in this story, that bit of fun chaos, and a total scene stealer. Living life to it’s fullest, determined to have no regrets, Kat is the heart and soul of this book for me. She’s hilarious, quirky, a breath of fresh air, yet also wise, poignant with wonderful depth. There were several times I found myself wishing that this were her story instead of Alice’s… I know, I know. Bad Dani. But I just adored her and Frosty and their on-again, off-again relationship. I need more of them. Seriously, Gena, they need their own book. Pretty please?

Though I really did enjoy this book, and in particular the three characters above, there were several things for me that made Alice in Zombieland stop short of being stellar…

World building.  It seemed overly complicated, a bit contrived, but yet also a bit too undefined. I know that description seems contradictory, but without going into specifics that’d ruin the book, I’m not sure how else to properly explain it.

Plot.  This book is so centered on Alice, her growth and her relationships, that sometimes the plot feels secondary which is fine if done well. However, the plot towards the end felt a bit paper thin – the climax a bit rushed, anti-climactic and left me feeling a bit “where the heck did that come from?” I think there needed to be a bit more development of key plot points – more foreshadowing, explanation and build-up.

A+C=❤. While on the whole I really enjoyed Alice and Cole’s relationship… there is bit of insta-love going on, though there is sort of a plausible explanation for that. Also, some weird mixed signals– something a simple, heartfelt conversation could have cleared up. I know Cole Holland is much too cool for the traditional DTR, but still… Little bit of advice fellas, when you’re dating a girl, make sure she’s aware of that fact. ‘Cause other wise you’re running into an “Oh, that was awkward…” kind of situation.

Other things I loved…

Pops and Nana.  They love Alice dearly, and they try their hardest to “speak her language.” It’s sweet, oh-so-funny, terribly awkward yet heart-warming. They really do mean well.

Emma. Alice’s relationship with her little sister is simply adorable; she really cares about Emma and her happiness, views her as a friend and loves her to pieces. There’s nothing Alice wouldn’t do for Emma. Though Emma is not in the story very long before tragedy strikes, Gena’s portrayal of Alice & Emma’s relationship is perfectly portrayed and developed.

The twists. Buckle up.

The zombies. Creepy to the max, y’all. The way they’re described, the build up of tension, the pacing of their scenes… Well, let’s just say I was utterly wrapped up in a particularly nightmarish scene when all the sudden a completely normal household noise caused me to jump about four feet in the air while clutching the book to me like it was my last line of defense against the inevitable zombie hoard I just knew lurked (lurched?) behind my closet door. Whoah, girl. Clearly, no more caffeine at 11 pm for Dani…

Overall, despite my issues with the plot, the world building and the romance, Alice in Zombieland is a highly entertaining read with really fun characters, super creepy zombies, and lots of cute zombie-killing boys. True story. 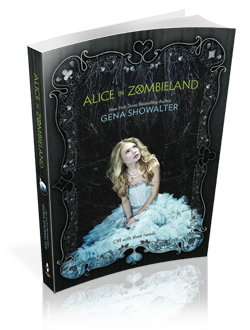