Disclaimer:   If you haven’t read Dearly, Departed this review could seem a bit spoilery.  Perhaps wait to read the review until after you read the novel.  =)

Lia Habel has achieved new levels of awesome in this second installment of the Dearly, Departed series.  I adored this book not just because of its Cyber-Punkiness or its New Victorian setting or the fact that Miss Habel has somehow made zombies realistic and loveable but because of the way she weaves a story.  Her books have a certain “sit back and savor” feel, which I love.   They blow your mind and then pat you on the head and say, “See?  Wasn’t that fun?”

First awesome?  THE PLOT!  I’m gonna come clean right now and tell you, I almost never like book 2 in a series as much as book 1.  It’s usually not as tightenly done.  It’s usually drama for the sake of drama.  Not so in Dearly, Beloved.  It is exquisitely woven.  The twists were just right.  Everything made sense within the world Habel’s created while at the same time introducing new character/plot arcs.  The conclusion was exactly what it should have been.  In other words, Dearly, Beloved drives the story forward instead of sitting around twiddling its thumbs waiting for book 3.   Well done, Miss Habel.  Well done.

Another selling point for this fantastic read:  legitimate, multiple POVs.  I say legitimate because this series doesn’t just give you one or two perspectives, it gives you several and, in this case, it really works.  The POVs heightened the excitement and kept the pacing perfect.  I loved getting the villain’s perspective and some of the newer characters as well.  There were also some unexpected perspectives which were incredibly intriguing.  I’ll confess, the first half of the book I kept wishing for more of Bram’s POV.  However, the second half totally delivered and I set the book down feeling completely giddy over where the story leaves off.

I adore the love story of this series.  It’s not what you’d expect and it’s not super lusty.  My heart is happy when I read it because Bram and Nora genuinely care about and respect each other.  Bram adores Nora and wants to protect her, but he doesn’t hold her back or try to stifle her.  He loves her feistiness.   She admires his strength and his mind and who he is as a person.  It’s a romance I want to cheer for because they aren’t just trying to rip each others clothes off all the time.  It’s refreshing.

And finally, my favorite aspect of Dearly, Beloved, and the series in general, is definitely the characters.  Nora is still fun and quirky.  She’s still headstrong and determined, yet this time she’s stuck in the constraints of her corseted society so she’s feeling a bit confined.  You can imagine how well that went over. Nora isn’t really the sit back and do nothing sort.  Bram is still snarky and genuinely good.  He’s courageous and trustworthy and can make me laugh out loud, sigh “awwwwwww,” and yell “that’s right buddy, you go kick some butt.”  Pamela is different than I expected.  I loved her in Dearly, Departed but was struggling to enjoy her character in this novel…until Lopez was re-introduced, whom I hope we see a lot more of

, I really didn’t know what to think about her.

To put it simply, Habel has created a beautiful sequel.  Utterly captivating and entirely perfect advancement to the series. 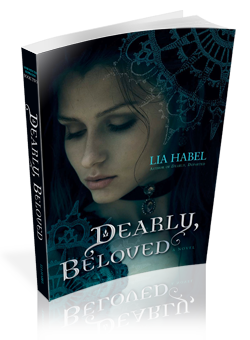 Series: Gone With the Respiration (Book #2)