Ember operates on a no-touch policy with all living things–including boys. When Hayden Cromwell shows up, quoting Oscar Wilde and claiming her curse is a gift, she thinks he’s a crazed cutie. But when he tells her he can help control it, she’s more than interested. There’s just one catch: Ember has to trust Hayden’s adopted father, a man she’s sure has sinister reasons for collecting children whose abilities even weird her out.

However, she’s willing to do anything to hold her sister’s hand again. And hell, she’d also like to be able to kiss Hayden. Who wouldn’t? But when Ember learns the accident that turned her into a freak may not have been an accident at all, she’s not sure who to trust. Someone wanted her dead, and the closer she gets to the truth, the closer she is to losing not only her heart, but her life. For real this time. (Goodreads summary)

It’s been two years since the accident that killed Ember’s dad… and her. Two years since her little sister Olivia miraculously brought Ember back to life. Two years since Ember’s mother sunk deep inside her self – into mental illness and depression. Two years that Ember’s been struggling to provide, care and keep her fragmented family afloat, all while trying to survive the cruelties of her high school and her former friends. Two years since she’s felt the comforting touch of another human being, because now her touch means death for any living thing. A lonely, exhausting way to live indeed.

When an unintentional tragedy occurs, Ember’s already tenuous life comes crashing down around her ears. She and her sister are whisked away to West Virginia under the protection of Jonathan Cromwell, a benefactor and protector (a.k.a connoisseur) of Gifted children. But it soon becomes clear that she’s not as desirable as her sister, that Cromwell & Co. view her as dangerous, unnatural and a risk. She’s tolerated because of her sister’s amazing talents and continually threatened with the frightening prospect of being shipped to the possibly-evil “Facility” should she make one false move. On top of that, she begins to fall for Cromwell’s adopted son, Hayden, whom she’d very much like to touch (but obviously can’t), someone at her new school begins harassing her in increasingly disturbing – not to mention, deadly – ways, and accepted truths once thought rock-solid are revealed to be standing on shaky foundations. Ember begins to wonder if she really has the whole story behind the night that ended her life, and why someone did, and still does, want her dead.

Ember.  Ember. Oh, Ember. Her situation is just so frustratingly impossible, that I just couldn’t help but feel for her. Alive, but not truly living, innocence lost, childhood cut short – she’s alone, unwanted, unloved, judged for an ability that she has no control over. A scared girl with no one in her corner, Ember fears the very real possibility of killing someone, frightened of what her ability makes her. She’s stuck, her choices having been stripped from her by Jonathan Cromwell, and this frustrates and terrifies her… both for herself and for her family as she questions his motives. He and his household, with the exception of Hayden, have made it clear they barely tolerate her presence and only for the sake of Olivia. She loves her sister more than anything in the world and will do what’s best for Olivia, even if Ember herself is suffering. She’s a combination of both great maturity and surly teenage attitude, she’s realistic, practical, protective. Ember has a great inner strength and resolve that I’m not sure she’s even aware of half the time. She’s just a very empathetic character – one that inspires the reader to root for her.

Hayden. Well hello there, Mr. Love Interest. Ok. I didn’t really know what to make of Hayden when I first met him, honestly, I thought he was a teench creepy. However, he grew on me as the story went on. Hayden’s got a tinge of darkness to him, secrets, a tortured past. He’s extremely protective of the little “family” Cromwell has formed, stubborn to a fault, he’s an extremely powerful, gifted boy with quite the intimidating (and cool!) gift.

No… I’m not going to tell you what it is. Read the book.

I had slightly mixed feelings about their romance. I did end up wanting badly to see the two of them together, hoped that she’d somehow be able to overcome her curse, but at the same time, I wasn’t sure if I completely trusted Hayden. I felt like he wasn’t super consistent and gave her mixed signals, plus he was the tiniest bit of a creeper before they actually met. But like I said, he grew on me after a bit. And of course, the romantic tension that Jennifer does oh-so-well is present and accounted for.

Everybody else. Jonathan Cromwell is like a more sinister, less benevolent, and way more creepy Dr. X. The mayor of Petersburg, West Virginia (yes, THAT Petersburg), he “owns” everything and everyone in it. He’s gathered together a group of gifted teens who are highly devoted to him, add that in with his intentionally intimidating and slightly threatening manner, and I’m with Ember on this one… he’s just creepy and I don’t trust him. Turns out he doesn’t trust Ember either. I mean, I guess I can’t quite blame him, she’s like Walking Death, one touch away from realizing someone’s mortality. And Cromwell isn’t the only one who doesn’t want her there, the whole family would rather she were gone than pose the 24/7 threat she does. One wrong move and she easily could jeopardize their existence, their location, attracting the wrong kinds of people. She is tolerated however, under the threat of dire consequences, for the sake of Olivia. As always, Jennifer’s secondary characters, even if they just have the tiniest blip of an appearance, are never, ever cardboard-ish, but instead, thoroughly developed for the part they’re meant to play.

Story. While interesting and attention-grabbing, the story of wasn’t as complex as I thought it might be. Not that I didn’t fly through it, and not that it didn’t keep my interest, it certainly did, but Cursed is a novel that’s slightly more romance-centric than plot-heavy. Which isn’t necessarily a problem, it’s just with what Jennifer’s done with the complex threads of plot in Onyx and then again in Deity, I was just hoping to see some of that well-executed intricacy in Cursed as well. That said, I don’t mean to imply that this novel is poorly written, not at all. It’s just a bit more on the simpler side plot-wise than some of her more recent books.

The mystery is pretty well done. Jennifer does a great job of communicating Ember’s frustration and fear, of weaving an atmosphere of distrust, and of creating a building feeling of suspense.

Easter Eggs. Since Ember & Hayden live practically in the same town as Daemon & Katy, be on the look out for some Lux series easter eggs. <wink>

Overall. With Cursed, Jennifer has proven yet again her wonderful ability to create heroines that are at once so unique and yet so relateable, as well as a supporting cast of characters who feel like real, fully-rounded individuals. Thrown in her extraordinary skill for building deliciously palpable romantic tension and developing a suspenseful mystery, and you’ve got just the book to curl up with on a crisp, autumn evening.

A little bit about Jennifer… 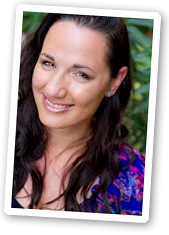 ONE (1) follower will win a Kindle/Nook ebook of Cursed by Jennifer L. Armentrout